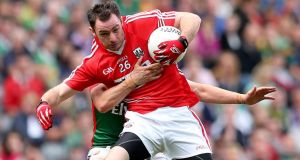 There’s a long lost yarn that concerns an American golfer from the 1940s by the name of Lloyd Mangrum. Legend has it that one afternoon after he’d holed a short putt that looped the cup before falling in, a spectator remarked as he walked off the green that it wasn’t the best putt she’d ever seen.

“Lady,” Mangrum shot back, “we ain’t playing how, we’re playing how many.”

The “how many” came down on Mayo’s side here yesterday, but boy did they make the hole look small at times. They got out with a point to spare at the end, and but for the grace of some helpful refereeing could easily be staring down the barrel of a replay or worse this morning. Instead, they are in a fourth All Ireland semi-final in four years, testament above all else to their endurance and bloody-mindedness.

Mayo were the better team. And in Cork, they beat a good side who played well and who clawed themselves back a bit of reputation here. But this is one of those situations where two plus two doesn’t make four. Mayo found a way to win but they went away knowing they shouldn’t have had to try every key on the ring before the door came unlocked.

They ran into a Cork team that was spiky and aggressive, clearly on the hunt for a bit of self-respect after the Munster final debacle. Add in the shrapnel Mayo were shipping from grenades thrown during the week by the Cork management and it meant there was needle in the game from the start.

Kevin McLoughlin missed the best part of 10 minutes getting a cut attended to in the first half after Eoin Cadogan caught him with a flailing arm. Paul Kerrigan and Lee Keegan got in a spot of rasslin’ and rollin’, likewise Damien Cahalane and Keith Higgins. Tomás Clancy saw a black card midway through the first half, McLoughlin copped a yellow when he came back on.

When they did, they had Cork on the turn immediately. Aidan O’Shea grew into the game and drew the Clancy black card, from which Cillian O’Connor equalised. Aidan Walsh’s 55-metre free put Cork ahead soon after but when Alan Dillon popped up with a couple of points in as many minutes, it pushed Mayo into the lead and they were never behind for the rest of the day.

The sides went in level at 0-8 apiece but it was the 15 minutes after half-time that will encourage and irritate Mayo in equal measure. They outscored Cork by 0-8 to 0-1 over that period and at times they were irresistible. Dillon sniped another couple of points, Andy Moran likewise. Donal Vaughan high- stepped it forward to grab one of his own, McLoughlin, O’Connor and Jason Doherty all added to the pot as well.

The problem is that a seven-point lead with 20 minutes to go is a hill to climb rather than a mountain. Mayo sat off and Cork chipped their way back into the game. Donncha O’Connor swung over a couple of frees and a point from play, Fintan Goold nailed a second of his own. Suddenly the margin was down to just three. Cork came hunting for a goal. Ian Maguire drew a parry out of Robbie Hennelly and when Aidan O’Shea looked to have fallen on the rebound, Cormac Reilly decided Maguire had pushed him. Free out instead of a penalty.

A minute later, Colm O’Neill rounded Ger Cafferkey and bore down on Hennelly’s goal only to swish a fresh air under pressure from the chasing Mayo full-back. Again Reilly favoured Mayo in a close call.

Like all good teams should, Mayo suddenly remembered what their job was. Cillian O’Connor swung over his most difficult free of the day to push them one ahead before Aidan O’Shea showed the cutting edge that Vaughan and Moran had lacked earlier, rounding the keeper to plant home a goal with four minutes to go.

Yet back came Cork. Somehow – and it will surely be the subject of a nasty video session for Mayo to ascertain how – Hurley was found in a postcode of space in front of the Davin Stand 30 seconds later. Goal. One point in it.

Mayo scratched out a three-point margin again through Vaughan and Keegan but there was still time for Cork to score two frees through O’Neill. There just wasn’t time for three.