Kieran McGeeney and the triumph of self-improvement 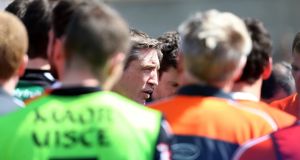 In the days before he led Armagh to an historic All-Ireland title, Kieran McGeeney was doing his media duty and all of 15 years ago, outlined his already circumscribed existence.

“You just get into a pattern. Like, I’m living in one of the best cities in Europe socially for the past four years and I honestly haven’t seen all that much of it. But I wouldn’t swap it, really. You make your choices and I’m happy with mine.”

At the time he was working in the Irish Sports Council in Dublin, commuting relentlessly to training back in his home county with a dedication that struck a chord with his ISC colleague John Treacy, a man well drilled in the lonely protocols of distance running.

“He just gives himself to it,” he said to Keith Duggan in these pages, “and is equally selfless in his work but his devotion to football is staggering.”

Even in his much-publicised hobby, Brazilian ju-jitsu, which he has practised for several years in the Straight Blast Gym under the supervision of Conor McGregor’s trainer John Kavanagh, who described McGeeney as “probably one of the most intense human beings I’ve ever met,” he registers the same impact.

Three years ago, when a selector with Armagh, he was asked to become involved with the Tipperary hurlers under Eamon O’Shea, as a performance coach. It didn’t turn out to be a long-term association but Séamus Callanan, short-listed for Hurler of the Year in each of the seasons since, spoke in 2015 about the influence.

“He was a massive benefit to me and gave me great confidence and a great sense that I could work on my own visualisation and mentality towards what’s going on. It was very, very helpful.”

McGeeney returns to Croke Park on Saturday, probably the centre of attention because the team he manages, Armagh, face the county he used to manage, Kildare. He won’t like any such fanfare and this season, having served a 12-week suspension – uncharacteristic for someone who has a good disciplinary record going back to his playing days – for verbally abusing a match official, McGeeney has been quiet, leaving interviews to his deputy Patrick McKeever.

There was always a contradiction about his dealings with the media. It was something that he always appeared to prefer avoiding but until now he rarely dodged the post-match rituals and when he spoke, he did so engagingly. Essentially though he is a private individual who sees football as primarily the business of those kicking the ball.

“When he went to Kildare and there was a certain amount of adulation he would have been uneasy with that,” says his predecessor as Armagh captain, Jarlath Burns.

“I remember in a team talk, I said, ‘lads – out there, there’s boys from all your clubs and all the townlands of Armagh. Boys from Armagh city, from Lurgan. Families from Portadown and Crossmaglen. Think of all those people. This is who we’re fighting for . . . ’

“Afterwards when we were having a bite he sat down beside me and said, ‘I thought your team talk was rubbish. The only people I’m thinking about is the man right next to me, the man who if I drop the ball comes in and rescues it, or the man if someone hits me will fucking hit him. See the boy in Row Z with his popcorn and Diet Coke, I’ve nothing in common with him.’

Management looks as if it was his destiny given a playing career of dogged self-improvement, developing into leadership and captaincy but it wasn’t always that straightforward.

“He didn’t really engage with anyone. I remember going on trips and he wouldn’t have a drink with you. He didn’t want to let anyone in on him,” recalls Brian Canavan, who, as joint-manager with Brian McAlinden, appointed McGeeney.

“He was young enough to become captain and had a few raw edges. The players really looked up to him. Sometimes I wondered, were they afraid of him because he really was driven but you have to be able to listen as well as lead. As the years went by he became more that type of person.

“He needed to work on his game and he grew into that centre half back position just as he grew into being a captain. It’s not just what you say but what you do that makes a captain, I think. That point he scored to put us ahead against Kerry two minutes into injury-time [2000 All-Ireland semi-final replay against Kerry] was the type of leadership we were looking for.”

Just as he had to grow into both an outstanding player and a captain, he also became an exceptionally good international rules player despite misgivings that he lacked the essential mobility for the game. It was another triumph of self-improvement, according to Brian McEniff, who managed him at provincial level and in his time as coach of Ireland’s international rules team.

“He was the most driven player I came across,” says McEniff. “I remember in 2001 when we were going to Australia he said he was going to America and I said, ‘Kieran you’ll have no chance of making the squad if you go away. What you do is go off and learn how to kick with that left foot’. By the time we got to Australia I can remember in the second Test he was pinging balls 40 yards with his left.”

When Joe Kernan took over as Armagh manager for 2002, the meeting of minds with McGeeney was a keystone of the All-Ireland success, but relations cooled in later years when Kernan famously replaced his captain in the closing minutes of the 2005 All-Ireland semi-final against Tyrone. In his first year as Armagh manager, McGeeney caused controversy when allowing Kernan’s son Aaron to walk away from the county panel.

“The episode with Aaron wouldn’t have helped Kieran so early in his management,” says Canavan. “He was probably Armagh’s best player when he was let go.”

Another thing that hasn’t helped is that his success with Kildare perhaps inflated expectations in his own county. That six-year term saw Kildare reach the All-Ireland quarter-finals for the first time and keep returning until his last championship – making the last four in 2010 when they lost narrowly to Down.

It was also a tenure with plenty of controversy, not all of it by any means McGeeney’s fault. There were refereeing decisions that individually were at least debatable and cumulatively constituted sufficient misfortune to interest Thomas Hardy; the resignation of a county chair, Pádraig Ashe, with whom the manager had clashed; and the attempt to ‘acquire’ Cavan forward Seán Johnston, which ran like a situation comedy through the summer of 2012.

The final controversy came in 2013 when McGeeney walked away after failing to secure what he felt was adequate backing from the county board.

Despite this, one of his predecessors as Kildare manager, Pádraig Nolan, says that the period in question is very fondly remembered in the county.

“There were five summers of getting to quarter-finals, which was unheard of, so McGeeney’s years would be very fondly remembered and they’d be fairly close to being viewed in the same category as Mick O’Dwyer’s years, in the sense that there was excitement every summer. Leinster might have been a disappointment but we got through the qualifiers every year and there was the buzz of all that.”

He believes that personality conflict was at the root of most of the problems, including the resignation of Pádraig Ashe and the rows about club access to county players.

“That happened at the end but the funny thing is that the template Kildare are using now is the same as was in place under McGeeney. I think the end came because of personalities. He didn’t make friends for the sake of making friends and that told in the end.

“If the chairman resigns, it’s hard to blame the manager.

“To sum it up, you couldn’t but give him credit. He did a very good job with a very workmanlike team. How I compare it is that Johnny Doyle was the only player on that team who you would have said would get on the top teams, whereas with the present team you pick out three or four players who would be competing for a place on any of the top teams.”

The consensus is that he has an even less imposing hand in Armagh and in his third year, the county are still in Division Three and again fell at the championship’s first hurdle but the qualifiers have produced three straight wins and a return to Croke Park for the first time in three years.

Saturday’s outcome will determine perceptions as to whether progress is being made with the team but Jarlath Burns points out that Kieran McGeeney has always gained the approbation of any manager’s primary audience.

“The first people you look in relation to that are the players. I’ve never heard any player come even close to dissidence and when they were beaten by Down the feeling in the dressingroom was, ‘we let Geezer down’. Not everyone has the ability to get that level of loyalty.

“He would keep his cards close to his chest. Not many really know him. He’s a very private person but with that, he’s a very genuine fella and very generous too.”