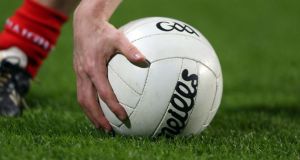 Kevin Walsh resigned as Sligo manager last night after Derry eased into the second round of the All-Ireland qualifiers. The home side didn’t have to overly exert themselves against a visiting side that never looked remotely capable of causing an upset at Owenbeg.

Derry dominated the opening changes as Sligo struggled to adapt to the pace of the game. Enda Lynn opened the scoring after 16 seconds whereas it took the Connacht side fully 16 minutes to raise a white flag by which stage Derry had seven points on the board.

Similarly Lee Kennedy should have found the Sligo net on 27 minutes but his lobbed finish did at least garner a point. By this stage Sligo were looking more competitive and they claimed their third point from Mark Breheny to close the gap to 0-8 to 0-3 but Derry went in with six-point lead as Kennedy kicked his third of the half.

It didn’t take Sligo as long to get off the mark on the restart, Marren kicking the opening point but Kennedy quickly responded. Sligo continued to gain a foothold in terms of possession and territory but wasteful finishing meant they couldn’t close the gap as frees from Marren and Breheny were cancelled out by points from Kennedy to leave it at 0-12 to 0-6 after 55 minutes.

In the final 15 minutes the game which had never hit the heights fizzled out and Sligo seemed to accept their fate. Lynn, Eoin Bradley and Bell all pointed from play and Emmet McGuckin hit the crossbar while Sligo, who failed to register a single point from play in the second half, could only muster two more Breheny frees.