Aherne leads from the front as Dublin cruise back into decider 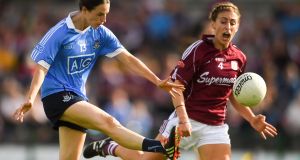 Dublin manager Mick Bohan admitted his ‘confident’ side is looking forward to facing a Cork squad that has dished out three TG4 All-Ireland final defeats to his side in the last four years, in what he thinks can be a September spectacular for ladies football.

Croke Park saw a record attendance of 46,286 for last year’s final between Dublin and Mayo, and Bohan is excited to see what happens in the September 16th decider – especially with the men’s hurling and football set to be well in the past by that stage.

Dublin looked a class apart on Saturday at Dr Hyde Park as first-half goals from Nicole Owens and Sinéad Aherne put them in total control. Galway staged a second-half comeback, but they were ultimately swept away by Dublin’s classy forward play and their intense tackle power.

Captain Aherne fired 2-4 for her her team, while Lyndsey Davey’s second-half goal ultimately quenched any hope of a Galway comeback after Olivia Divilly’s goal and Tracey Leonard’s frees slowed pulled them back into contention.

But with a GAA community hungry for action, Bohan anticipates another wonderful occasion at Croke Park when the two rivals collide.

“We were talking about this a couple of weeks ago and we were just saying that if we were lucky enough to get to the All-Ireland final that there should be a massive crowd,” said Bohan.

“September all of a sudden – where we’ve always looked forward to our games – [people are thinking] what are we going to do? I think that’ll actually help the women’s game for the middle of September.”

It was the Dublin blitz in the first quarter that ended Galway’s hopes. The first score was a goal from Owens after four minutes, Aherne fisted to the net nine minutes later, while the captain converted a penalty eight minutes from the break, which Galway never recovered from.

“We just didn’t come out and play the way we wanted to. The things that we were trying to do and we talked about that just didn’t happen,” said Galway manager Stephen Glennon.

“There are hugely physically conditioned team. For our girls to get there is going to take another year or so – maybe two years. For us it means every one of those players in the group committing to it long-term.”

It remains to be seen if Glennon comes back for a third year in charge of the side, but reaching a first All-Ireland semi-final since 2014 was a significant achievement for his squad.

As All-Ireland champions Dublin have carried an air of confidence with them all season, but beating Cork, a side who have won 11 of the last 13 All-Irelands – Dublin won the other two – would make the defence of their title all the sweeter.

“Look, it’ll certainly give a little bit of an edge to it for sure,” said Bohan. “This group are obviously coming with a different type of confidence than they were a couple of years ago; that all matters.

“But it’s the old enemy and that’s probably something that will be built up outside the camp. Inside, realistically, and these aren’t cliches, we’ll prepare for the game like any other game and it really doesn’t matter what colour they are or who they are, you just go after the prize and that’s what we’ll do.”

Liverpool eyeing another comeback; Outline plan for return of club rugby 07:35
Seán Moran: DRA saving the GAA a lot of money for 16 years 06:00
Sarah Lavin bidding to clear last hurdle on the way to her Olympic dream 06:00
Basketball’s loss is rugby’s gain as Lauren Delany makes up for lost time 06:00
Gordon D’Arcy: Béibhinn Parsons is the gift, IRFU must now do the giving 06:00
Crossword Get access to over 6,000 interactive crosswords