Kevin McStay: Mickey Harte will know what Tyrone need to do

Tyrone manager has never lost an All-Ireland final, but he’s up against 70% conversion rate 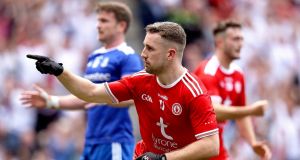 The better team won on both days over the weekend, but if Sunday’s Tyrone-Monaghan encounter was the more exciting semi-final, it was also lower on sustained quality.

The second half in particular was a succession of frees and wides, fouling, more frees and more wides. There was no flow to the game and a lot of ridiculous turnovers. Monaghan showed once again their resilience (it was unbelievable how they were level at half-time) and they were unlucky not to get to extra time, but if Tyrone had executed earlier chances they would have been out of sight.

Their decisive goal was fortuitous, though, even if Niall Sludden tucked it away well because Darren Hughes had made a marvellous block on Tiernan McCann.

It was the difference in the end: Monaghan had two massive goal opportunities but Morgan did well to block Vinny Corey after Colin Walshe’s kick came back off the post, and Conor McManus will feel he might have done better with his earlier chance. Two chances, no score.

Tyrone had one chance and took it.

Their key players also stood up. Colm Cavanagh’s work rate throughout was unrelenting and, when the match had to be won, Peter Harte raised his game. Having got a fair old clatter from Drew Wylie, he recovered and made the crucial goal with his intelligent running.

It would have been easy for him to dish it off to another forward and drop back, avoiding responsibility, but he really attacked and set up McCann for what led to the goal.

Credit too to Pádraig Hampsey, who did a great job marking Conor McManus. To have someone who usually plays a more central role so comfortable with a man-marking brief is a tribute to their versatility and they’ll need that when devising match-ups for the final.

They went nearly 20 minutes without a score, which is another area that will have to be addressed. They’ll know that they will have to show more in the final, but it will be a huge boost for their development as a team. Mickey Harte knows his way around these occasions and has never lost an All-Ireland final.

On Saturday the best team by a distance won. When they went six up in the 52nd minute, it was game over. How often have we been able to say that going into the last quarter of Dublin’s championship matches? It would be interesting to see how they would react to being five or six down because they hardly ever look not in control by that stage of games.

The key to what they can do is conversion rate. On Saturday, for instance, Dublin were close to 70 per cent and Galway couldn’t break 50 per cent of chances created.

That sums up the big issue for all the teams now challenging Dublin: you will get opportunities but you must apply the pressure when you’re presented with them. Galway failed to do so at a critical point.

For me it was done and dusted within six or seven minutes. There’s 7:30 on the clock, Damien Comer scores the goal that levels it – out of nowhere, so Galway have to be very happy with that as a start.

Then from the kick-out they turn it over and Comer and Johnny Heaney approach Stephen Cluxton. Comer just has to touch the ball to the right, soccer-style, and Heaney has an empty net but instead he takes the shot on himself and Cluxton saves it and the chance is lost.

The penalty comes on 11:13. Eamonn Brannigan took it and he hasn’t scored a championship goal so it’s a big moment for him. As a former penalty taker it struck me that that the ball sat very low on the spot. I thought immediately, “Jeez, he needs to reset that,” but he didn’t and the connection he made on the ball wasn’t great.

It was a good save but a ’keeper like Cluxton would have been disappointed not to stop it. Then Galway missed the 45. They lose Dublin’s long kick-out and Ciarán Kilkenny scores. From that kick-out Brannigan is turned over and Fenton scores, so instead of being comfortably ahead at the end of that third quarter, they are two down and the question hasn’t been asked of Dublin.

That big moment, that potential swing that could have got what Galway crowd was there really going is now gone. After that they could never get momentum, could never win the next kick-out after a score. You can’t keep conceding possession to opponents, especially when the opposition is Dublin with their 70 per cent conversion rate.

By the 67th Galway had scored just 1-10 and that inability to trouble the umpires sufficiently is an ongoing problem.

They did illustrate again Dublin’s vulnerability to high diagonal ball but were unable to ask that question often enough; to be fair, not many teams do.

In the second half Dublin just squeezed and squeezed, work rate high and skill levels excellent. They didn’t risk as much kicked ball into the forwards as they had in the first half. Look at the vast number of scores that come from 20 to 30 metres out and the constant drive to turn strong scoring chances into certain ones.

They have one huge advantage – really selfless team play, even from subs coming in who could do with a score or two to their name.

They’ve reached an All-Ireland final after a season in which there has been a lot of talk about how difficult it is to do a four-in-a-row – and it still is – but they’re there at the last hurdle with a minimum of fuss.