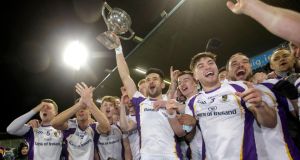 At the end, as the Kilmacud Crokes players jigged around Parnell Park as Dublin champions for the first time since 2010, one of the urchin army that you see at any club game sprinted out onto the pitch and headed straight for Paul Mannion. He was a small lad, not the height of Mannion’s waist, and his mission was clear. He wanted the man-of-the-match’s gloves.

When Mannion gave them up, the young supporter turned around delighted with himself. His only problem right there and then was that he had nobody to share the moment with. He looked around excitedly, in search of someone – anyone – to give him some respect for his haul. It was his misfortune that, not for the first time, there was nobody else within an acre of Mannion.

This was Kilmacud’s title but it was Mannion’s game. He finished the night with 1-6 from play to his name after a performance of luminous brilliance. Crokes had fine displays from Cian O’Sullivan and Cian O’Connor to thank as well but Mannion was an island here, operating in a time zone removed from the rest of the players on the pitch.

It’s sometimes bracing to see a countyman take his satisfaction at this level. Mannion is a half-step quicker than most intercounty defenders in his head and usually twice that on his feet. So to see him in full cry in a club environment is almost unfair. It was like watching broadband arrive into a dial-up house.

He had four points from play against his name inside the first 20 minutes. For his opener, he thumped a high spiral from the right-hand side that had left his boot before his marker Ciarán Fitzpatrick had so much as his hand up to argue his case. For his second, just short of the 10-minute mark, he danced left and right facing Fitzpatrick with dizzying speed – again, the shot was well on its way to the splitting the posts before the Jude’s defender could get himself set for a challenge.

Fitzpatrick is no mug, by the by. He has had a few seasons on and off the Kildare panel and played fairly extensively in the Jason Ryan era. He’s never been a top-flight, elite defender but he’s not a world removed and is as sticky as you can reasonably expect at club level. And still, Mannion tormented him throughout.

That said, Crokes made slightly harder work of this than they needed to. They went in four ahead at the break, 0-7 to 0-3 up thanks to a belter of a score from O’Connor as half-time approached. It was hard to shake the feeling that they ought to have been further ahead by then – their goalkeeper David Nestor hadn’t needed to take a kick-out until there were 18 minutes on the clock. A couple of Niall Coakley frees and a rousing effort from midfielder Séamus Ryan got Jude’s underway when really their interest should have been quashed.

Lo and behold, it was the Templeogue side who started like a train in the second half. Kevin McManamon had been quiet in the first half but he nailed a point within 30 seconds of the restart. And though Mannion replied with his fifth in more or less the next breath, Jude’s strung together three in a row soon after and all of a sudden, we had a game.

Pádraic Clarke started it with a fine score off his right and wing backs Tom Lahiff and Chris Guckian both strode forward for points of their own in the subsequent attacks. Ryan was in charge at midfield now and Nestor couldn’t get a kick-out away so Jude’s were keeping Crokes penned in in their own half for a good four or five minutes. Only when O’Sullivan took responsibility and called one on himself out near the sideline did they escape.

For Crokes, that one kick-out felt significant. They were able to breathe a little and get themselves organised again – and of course the move ended with Mannion stitching his sixth of the night at the other end.

The killshot came in the next attack. From the kick-out, Jude’s lost possession in midfield and former Dublin and Clare forward Pat Burke was left all alone in the full-forward line. With Mannion shouting at him to tap over a point, Burke put his head down and drove a peach of a goal in off the underside of the crossbar. Just like that, the gap was out to five, 1-9 to 0-7 and though there were 20 minutes still to go, Jude’s were gasping for their breath by now.

They plugged away all the same. McManamon put up another, Coakley iced a free, substitute Tom Devlin made a whirlwind impact off the bench with an immediate point. Jude’s were holding their own in the physical exchanges and Crokes were struggling to shake them off completely. With four minute to go, it was still a two-point game.

The last word, as was only right, belonged to Mannion. Left one-on-one with Fitzpatrick again inside, he gave a little shake-and-bake to dance around him and slid home a neat finish.

He had never won a medal of any kind with Crokes before now. If you’re going to scratch an itch, you may as well do it in style.