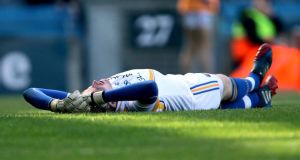 Longford goalkeeper Paddy Collum lies prone after conceding Dublin’s fourth goal. Here was a match completely devoid of the so-called blanket defence approach and there seemed to be uniform agreement that it was a very poor spectacle. Photograph: Donall Farmer/Inpho

We arrived at my in-laws in Creeslough just in time to watch the Dublin-Longford game on Sunday. I am on the first week of a summer break from Celtic and have been enjoying the unbroken sunshine and soaring temperatures which settled over Donegal for the weekend. Marjorie, my mother-in-law, handed me a cup of tea just as the ball was being thrown in and I realised that by the time I had finished drinking it, the championship match was pretty much over as a contest.

Dublin scored 0-3 in the opening three minutes and they maintained that rate of scoring going until the 10th minute. It was an onslaught, with Dublin moving through the gears and facing no real pressure or defensive intensity.

Because of the way Longford set up, Dublin had free rein of Croke Park. At half-time they had notched up 2-14, which in other circumstances is a very respectable full-time score. The ironic thing was the Dublin performance contained a number of unforced errors because they had so much time on the ball that their decision-making was probably a bit off. So there was very little in the form of real excitement.

As I watched the match, one question kept recurring. Why did Jack Sheedy set his team up the way that he did? We were told before the match that Longford were not going to play a defensive game and Jack was very much true to his word.

From what I could see, they had a sweeper covering in front of the Dublin full forward line from time to time. But that was their only concession to the attacking threat which the Dubs present to any team. The Longford players more or less matched up against Dublin man-for-man. I felt it was a brave thing to do and very interesting as well. In many respects, it turned out to be disastrous for Longford in terms of the final scoreline. I’m not sure how much Dublin got out of the game either.

I find it difficult to believe Jack did not know what sending a team out to go toe-to-toe with Dublin would mean. Apart from anything else, he is a former Dublin player and knows from first-hand experience how potent his county are in Croke Park. On top of that, all the evidence of recent years has shown the current Dublin team are extremely dangerous in open games of football. On several occasions against Cork, for instance, they showed just how dangerous they can be in a straight shoot-out, racking up huge scores and overturning big deficits in bursts of sustained attacking play.

And Cork are one the premier football teams in the country over the past number of years, with a huge bench, powerful athletes and highly skilled, All-Ireland calibre footballers. I feel that there is no way that Jack sent his team out to play man-to-man out of naivety. In my opinion, sending Longford out to play like that was not about trying to win the game; it was in order to uphold a moral philosophy. And it adds to the debate that is raging about our game just now.

If you look at the structure of Gaelic football now, it can be broadly broken into three tiers. There are the traditional counties, who have accumulated the majority of provincial and All-Ireland titles and who set out with the ambition of competing for more every summer and of perpetuating that tradition. There is a third tier comprised of counties who don’t really feel that they can compete or win provincial or All-Ireland titles because a century of tradition has told them as much. The reason why Clare’s success in Munster in 1992 or Leitrim’s triumph in Connacht in 1994 stand out so clearly is that they were rare exceptions to the rule.

But there has emerged in recent years a middle tier comprised of counties whose teams and managers are desperate for success and who are trying to find ways to prise their foot in the door and challenge for honours.

They are sick of being second best. They are very hungry for success and medals and to make an impact on the championship and to earn some credibility in their career. Most teams in Ulster fall into this category. Roscommon have been sending out that signal in recent seasons. Tipperary is a coming county. Kildare, during Kieran McGeeney’s tenure, were a perfect example of a team doing everything in its power to force its way in. These teams are interesting because when it comes to the debate over how football ‘should’ be played, they attract the most criticism.

Let’s say that we did away with well set-up defences – which are habitually referred to as ‘blanket’ defences. I feel it is an inaccurate term because it holds connotations of something shapeless and formless and heavy when, in fact, a successful defensive structure is dependent on the opposite characteristics.

But let’s say all teams in the championship approach the game the way Longford did yesterday and go out to play in the traditional one-to-15 format where players match up on their immediate opponent.

In my opinion almost every county in tier two and tier three facing Dublin in that fashion would have received a beating similar to that which Longford suffered.

History shows us that. For decades, teams went out and played to that format. The traditional counties won out again and again. Look at the provincial and All-Ireland records. The system is to all intents rigged against most counties – for reasons to do with population, with resources, with coaching structures.

So if we all approach the game in the same way, it stands to reason that the results will always be the same.

What intrigued me about Longford on Sunday was I think Jack Sheedy knew this but just said: ‘We will stick to our guns here. We will go out and do our best and we probably won’t win the game but we will retain our footballing integrity.’ His remarks afterwards seemed to confirm what became obvious from watching the game: it was a philosophical decision to match up against Dublin playing in the time-honoured way.

People can argue that Longford could not have won that game irrespective of how they set up. Perhaps that is true – but people were also adamant that Dublin could not be beaten last summer. However, Longford are among the teams in tier three; one of those counties facing a massive struggle to remain competitive and in any way in touch with the traditional, powerful teams.

The teams in tier two have a different mentality. I can guarantee one thing: Kieran McGeeney is not thinking about football philosophically this week. He is thinking about how best to give Armagh a chance to prise their foot in the door and challenge the established order of things. I imagine that John Evans is thinking the same way.

What Sunday’s game in Croke Park illustrated above all is that it is futile to have a hard and fast opinion about the way that teams and managers choose to set up in order to compete. Here was a match completely devoid of the so-called blanket defence approach and there seemed to be uniform agreement that it was a very poor spectacle and was arguably damaging to Longford footballers and to the image of the game generally. This is not to suggest the defensive system is the way forward for all teams, far from it.

Football is constantly evolving and there is no reason to believe the defensive-structure is here to stay. You can have 14 men behind the ball and still concede a huge score – unless you have a very clear and purposeful idea of what you are doing and why you are doing it. Managers need to work out what is best for their team to enable them to compete – particularly against tier one teams like Dublin.

This is an interesting point in the evolution of Gaelic football. For the first time, there is a clearly identifiable band of teams in that second tier who are hell-bent on challenging – and they are the very teams whose approach to football is attracting most criticism. This group of football teams do not care about the philosophy of how the game should be played or about aesthetics. They are just desperate to change the accepted order of the same teams winning all the time.

And I’m sure they will continue to have their say on the state of the game.

Hugo Lloris preserves Spurs’ dignity to keep them alive for trip to Leipzig 22:46
Manchester City see off West Ham without needing to leave first gear 22:49
Rashford ‘touch and go’ to play again this season – Solskjær 22:30
Limerick advance to Munster U20 football semi-final after beating Tipperary 21:20
Willie Mullins manoeuvring his Cheltenham forces into position 19:30
Crossword Get access to over 6,000 interactive crosswords