Jim Gavin: Diarmuid Connolly being let down by referees 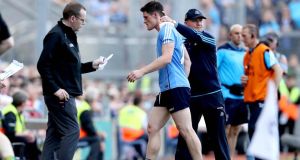 Jim Gavin was as close to ire as his public persona would allow. Flashes of red irked him. Of course, these “top class officials” were complimented by the same breath that excoriated them.

“In the main, forwards want to get on and play the game,” Gavin said.

“It was a source of disappointment that for a team that wants to play the game the way we want to, that we, Dublin, end up with 13 men. That is the surprising bit, I find. It is probably a question you need to ask the officials.”

“The players know my feeling about if you raise your hand and make contact with somebody’s head that you are going to get sent off and get no sympathy from me,” said Gavin. The replay showed O’Gara slapping McGee, with an open hand, in the midriff when the Donegal defender refused to release his jersey around the upper chest.

Briefly evoking memories to their 1983 forefathers (which contained one actual father in Barney Rock), when Brian Fenton was black-carded Dublin were down to 12 apostles for one of the late, last Donegal attacks. Mick Fitzsimons eventually made his second foray onto the field, having temporarily subbed for a bloodied Jonny Cooper, to ensure Dublin finished this frenetic, spiteful contest with 13 men.

Gavin’s main gripe returns to a firm belief that Diarmuid Connolly is routinely targeted by opponents and that the vice captain was undeserving of the first, if not his second, yellow card.

“It was all very predictable going into it; we all knew that some of our players would receive special attention. That was the case. It was up to the officials to act upon it. If they don’t, the eight of them, four umpires and four men in black, if they don’t act upon it they are letting the players down. On both sides.”

Balance, always balance from Gavin. What he giveth with the right hand, the left hand taketh away: “The officials are doing a fantastic job, the standards have really increased and the coordination between officials and umpires is certainly evolving, but they need to have a closer look at that one.”

Connolly’s resolve must be under strain? “He plays within the rules as best he can and we accept that. If he deserves to get a yellow card like the last game for rough play, then absolutely no complaint. But the rules have to be equally applied.”

Giveth then taketh: “The three officials, two on the line and the referee, are top-class referees, top-class officials, so it is up to them to take that confidence piece and act where they have to act.”

What to be done so? Gavin indicated the opportunity to introduce the sin bin rather than black card could have solved this problem (but he understands why that did not come to pass, of course).

“I’m a big supporter of the rules that were brought in to eradicate cynical play. I would have always been an advocate of the sin bin but I understand the logistical difficulties of that from an administrative perspective, in real time in games, but I think the black card has really served us well. You don’t see any cynical pull downs.”

Gavin also took the opportunity to praise the team Dublin just conquered. “They will go down in history as one of the best Donegal teams and they have a lot more to give.”

Just not as we knew them when they were winning big matches.

“That will be it after today, yeah,” said McFadden. “I don’t know, was it 14 or 15 years? Them young fellas, that game is changing all the time, and there is plenty of fine talent coming through, good legs, good footballers, so it is time for them to take up the baton now.

Future is bright for Donegal football.

“Every man has his day. Suppose you would like to play on forever but you have to move on at some stage. I was lucky. A couple of great years, particularly these past five or six when we had success. It was a good way for it to happen after those barren years for the first eight or nine seasons. That the success came at the end made it all the sweeter.”

Rory Gallagher is braced for more retirements. They will never again be the Donegal team that won the 2012 All-Ireland and three Ulster titles. That team leaves with McFadden and others who will eventually follow.

“It was a great time to be a Donegal footballer.”