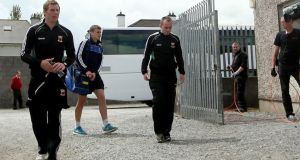 Gavin Duffy has been dropped from the Mayo senior football panel despite not having played a second of competitive action since his much trumpeted arrival nine months ago.

The ex-Connacht and Ireland rugby player’s reconversion to Gaelic games has proven to be a total anti-climax, as it emerged late last month that he was in fact ineligible to feature in last summer’s campaign and now a month after being finally cleared to play he is one of a handful of players to have been dropped from the current squad.

The new Mayo management team of Pat Holmes and Noel Connelly had up to now been operating with an extended panel of over 45 players although that has now been shortened. Those who have been let go will now return to their clubs where their form will continue to be monitored. Another cut is expected in the coming weeks before Mayo will announce their full 2015 panel.

A former county minor, Duffy made his return to gaelic football back in early May off-the-back of 13 years of professional rugby which many felt would have held him in good stead for a meaningful impact upon a team which had been knocking on the door for a while and falling just short.

It would emerge all of eight months later though that soon after his arrival to the Mayo set-up the county board were notified that the player was ineligible to play as he had missed the February deadline to declare for his home county. He is registered with Galway club Salthill Knocknacarra and therefore must declare to play with Mayo.

This was common knowledge among the Mayo management team and all involved, barring the fans of course and for a part Duffy himself; as anticipation continued to circulate over his apparent pending involvement.

The closest the former Connacht captain would then come to a competitive outing was when he was named to play at midfield against Sligo IT in this year’s FBD League but his ineligibility saga had still not been resolved at that stage.

He did eventually don the green and red last week when Mayo played Clare in a ‘last chance’ trial challenge game - one in which he is said to have performed well in by all accounts. Although clearly not well enough.

Clare manager Colm Collins says “tremendous credit” must go to the 11-time capped rugby international for his efforts to convert.

“He played well against us, but it’s a tough one for someone like him playing one code and then switching.

“You have to gauge who a lad is playing against, and he had plenty of competition against us [paired against Gary Brennan at midfield]. He looked comfortable, there’s a lot of things you would like that he did.

“He’s obviously a super athlete and very talented, and it’s a tremendous credit to him to have tried, but Mayo have great talent and a good young pool of players there.

“He would definitely be on a lot of county teams though, a lot of teams would love to have him for sure.”

Now working for Connacht Rugby in a commercial role, Duffy has had to miss two games this year although it’s believed he was still intent on putting in a big effort to increase his involvement for the 2015 campaign.

Nonetheless at 33 it would seem that any dreams of a return to Croke Park 16 years after the 1999 minor final have unfortunately now all but disintegrated.