Galway and Mayo unlikely to fill Gaelic Grounds for qualifier 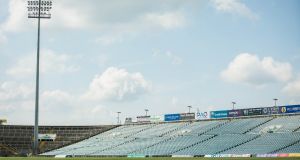 Galway and Mayo will head to the Gaelic Grounds in Limerick for their fourth round football qualifier on Saturday.

Three of the four final round qualifiers will be played on Saturday, with Meath versus Clare being played on Sunday and shown live on RTÉ.

The GAA says that “efforts to fix the Galway-Mayo game for a Connacht venue were not feasible as there was no agreement between the counties to toss for home advantage, and there was no other Connacht venue deemed capable of catering for the expected interest in the tie. Both counties were consulted and agreed to the Limerick venue which has a capacity of 43,000 with 20,000 seats.”

There were 17,639 in Salthill for Galway’s last match, their defeat to Roscommon in the Connacht final. Only 8,230 watched Mayo’s qualifier against Limerick last year in the Gaelic Grounds. While Galway and Mayo’s last championship meeting was the 2018 Connacht quarter-final in Castlebar, when the attendance was 29,449. Those figures, the additional distance for fans to travel, and the form of the Galway team in particular, would suggest the Gaelic Grounds will be far from full capacity for the meeting of the two Connacht counties.

Roscommon’s Dr Hyde Park hosted last year’s Connacht final, but in doing so the Connacht council confined the capacity to 18,870 and stressed the venue would not be considered for future provincial finals until a new entrance is completed in front of the terrace on the Athlone side. Last month the Rossies were shortlisted for the 2019 National Pitch Award, for the best pitch surface.

The clash of the two Connacht sides has been scheduled for the Gaelic Grounds in Limerick at 7pm on Saturday. It will be preceded by the LGFA Connacht final replay between the same two counties at 4pm.

The Cork v Laois qualifier will be played at Semple Stadium in Thurles on Saturday at 5pm and will be preceded at 3pm by the All-Ireland minor hurling round one quarter-final between Kilkenny and Clare.

The Cavan v Tyrone and Galway v Mayo matches will be broadcast live by Sky Sports.

On Sunday, O’Moore Park in Portlaoise will host a double header. The qualifier meeting of Meath and Clare will take place at 2pm before the All-Ireland hurling preliminary quarter-final between Laois and Dublin will then take place at 4.15pm.

The second preliminary hurling quarter-final is fixed for Cusack Park on Sunday with Westmeath and Cork meeting at 3pm.

Monday morning’s football qualifier draw set up a first ever championship meeting between Cork and Laois, and paired the four Division One teams in the pot against each other.

1 Gordon D’Arcy: Digging deep only recipe for Twickenham success
2 Robbie Henshaw and Bundee Aki to lead from the centre
3 Diego Simeone raises the roof with sideline spectacle
4 Jurgen Klopp: ‘welcome to Anfield, it’s not over yet’
5 Out of Bounds: remember when Darren Clarke usurped Tiger Woods?
Real news has value SUBSCRIBE