GAA Statistics: Should anyone outside of Mayo and Dublin win an All Star?

On average five players outside of finalists make the XV, three is the least amount 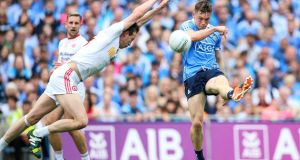 The All-Ireland final holds more weight than any other match when it comes to winning an All Star.

For the 30-plus Mayo and Dublin players who’ll be battling for Sam Maguire on Sunday week, they know a man of the match performance could catapult them from nowhere near, to being an automatic on that elusive XV. Or that one poor performance could knock them right out of contention.

However, for the players from the other 31 teams, there is nothing more they can do. And if they’re to be in the reckoning for any awards in November, then they should be in a very strong position at this stage. But as things stand, ahead of the final, the names standing out are Cluxton and Clarke; Higgins, Boyle and McCaffrey; Parsons and McCarthy; Kilkenny, O’Callaghan, Moran and O’Shea. The list goes on, and it's mainly Dublin and Mayo.

Since the beginning of the qualifier era in 2001, there has been an average of five All Stars awarded to players outside of that year’s finalists. Over the last 10 years even, 45 per cent of all the 45 All Star nominations have been from that year’s finalists. Last year five players outside of Mayo and Dublin (2016 finalists) were selected, they all reached the quarter-finals or beyond.

In a summer of thrashings, it looks highly unlikely that five players will push in ahead of the Mayo and Dublin contingent this time around.

The four 2017 provincial finals had an average winning margin of 0-9, the four quarterfinals concluded with an average margin of 0-15, and the semi-finals’ concluding average was 0-9.

The lowest amount of All Stars awarded to teams outside the finalists since 2001 is three. So, if three were to be awarded this year, who should get them?

The Tyrone midfielder seems the most likely selection, although his seemingly predetermined high kick on Brian Fenton may have turned some of the selectors off.

Unlike a number of his team mates who excelled during the Ulster campaign - halfback Tiernan McCann was the team’s joint top scorer from play (1-5) and Peter Harte was the team’s conductor - Cavanagh put in one of his best shifts of the year in the semi-final trimming against Dublin.

Operating as a sweeper-midfielder, Cavanagh’s role this summer has been to shield his fullback line and be a cool head in triggering the team’s counter attack.

And it was all going so well. Only two of the opposing nine starting full forwards Tyrone faced in the Ulster championship scored (0-4 from play). Armagh were held to 0-8 (0-5 from play) in their All-Ireland quarter-final.

In the Ulster final, the big midfielder was involved in four turnovers, he made a spectacular mark and an excellent assist. Yet he still managed to be inside his defensive 21-metre line for 20 of Down’s shots at the target.

But through no individual fault of Cavanagh’s, Tyrone’s rigid defensive system all came tumbling down against reigning champions Dublin.

He still made one big turnover and three interceptions in that semi-final defeat, and with things going against his team he made five surges forward; scoring two wonderful points - right and left footed - and he was fouled for a penalty. Dublin’s key score, Con O’Callaghan’s first half goal, came as he was caught out of position looking for a pass which never came. Dublin spotted his absence, pushed for the turnover and went for the kill.

His importance to the Tyrone system cannot be overstated, and his two points brought his 2017 season total to 0-6. Not bad for a sweeper midfielder, as well as being his usual commanding presence under the restarts. An All-Ireland winner in 2008, this was his 11th senior season, but Cavanagh has yet to win an All Star.

Of this year’s All-Ireland quarter-finalists, Kerry corner forward Paul Geaney has been the player who has the highest scoring average from play.

The multi-talented Dingle attacker has scored 1-18 of his 1-29 total from play, giving him an average of just under 0-4 from play in Kerry’s five games this summer. With those around him struggling against Mayo, and with Keith Higgins and co well on their game, Geaney still slotted 0-17 between the two semi-finals. Of that, 0-5 was from play, as he contributed 46 per cent of Kerry’s total across the drawn and replayed matches.

Of the counties who have played four or more championship games, only Kildare’s Daniel Flynn has a better in-play score per game average, and only Andy Moran has a higher in-play total. But the Mayo attacker has played four more games. Geaney is a beautifully balanced footballer, and some of his effortless-looking scores will feature prominently in the season’s highlights; he is in with a great shout of retaining his All Star.

Like Colm Cavanagh, Feely’s claim is heightened by his dominant showing in Kildare’s biggest game of the season; their Leinster final defeat to Dublin.

Matched up against back-to-back All Star midfielder Brian Fenton, Feely caught four marks, Fenton had just one mark. The Kildare midfielder also won another four breaks off his own contests as the Dublin midfielders scrambled to prevent more marks. All those fetches, and he is only jumping under his own kickouts, with Stephen Cluxton pinpointing runners for the Dublin restarts.

It was as good a traditional midfield display as Croke Park has seen in a long time, and he gave a similar midfield exhibition against Laois (where he had 55 involvements, and 45 of those were with ball in hand) and Meath in their respective Leinster quarter-final and semi-final.

Armagh’s young midfield duo of Stephen Sheridan and Niall Grimley had their moments in Kildare’s eventual Round 4 qualifier exit; but Feely, who missed his workhorse lieutenant Tommy Moolick, was still prominent catching ball and scoring 0-5.

Against Dublin, the former professional soccer player also scored a fine point from play, as well as converting the team’s frees from both sides

Over the summer he scored 0-17 (0-15 from frees), with right and left foot, all the more impressive when you consider he was first tasked with free-taking responsibilities mid-league. A league campaign in which he lorded the skies as Kildare secured their return to Division One.

In the first year of the mark, the man who has mastered it is deserving of an All Star based on the entire season and not just its conclusion.

Who else has a chance?

The last two players to win an All Star without their team getting to at least the quarter-final stage were Sligo’s Charlie Harrison and Louth’s Paddy Keenan in 2010, both counties were knocked out in the final round of qualifiers.

So those looking to break in will most likely still need to have been playing by the last week of July, at least. Leaving it extremely hard to see somebody like Tipp's Robbie Kiely being considered, despite 1-2 in three games along with his usual defensive tenacity and leadership.

Monaghan corner back Fintan Kelly put his name up in lights with four championship goals coming up from the back, but there’s more to winning a defensive All Star, and his team mates Karl O’Connell and Kieran Hughes (0-9 from play from midfield) were best for the Farney county. Damien Comer was a constant standout performer for Galway on the good days and the bad, he’s averaged 0-2 from play per game in all of 2017, and although the Kerry defeat was his only starting game not to score in, the powerful no.14 was by far Galway’s best player.

Roscommon are Connacht champions and for them, Enda Smith was the star in the province, John McManus was a defensive rock against Galway and Mayo (draw) in holding Thomas Flynn and Diarmuid O’Connor scoreless with both outplayed and replaced; while Conor Devaney managed 2-6 in four championship games while operating largely from wing back. Of the three, he was most consistent.

Connaire Harrison really lit up the middle stage of the championship. The Down full forward bagged 1-9 from play in four key games, giving Drew Wylie two days to forget. Peter Crowley and Paul Murphy maintained their high standards and will be there if others let themselves down in the final. Murphy has 0-4 in his five championship games, he outscored Lee Keegan in their match up (0-1 to no score), and adapted well to his sweeper role in the semi-final replay.

But barring a dire All-Ireland final - which is unlikely - and this year’s All Star allocation looks set to be more dominated by the two finalists than ever.