All-Ireland: showpiece belonging to two of the game's finest outsiders

From the first whistle in Croke Park, Galway gave a dazzling tirade of near-perfect hurling 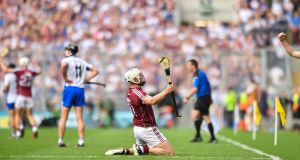 It has been the year of maroon redemption. After 29 winters of searching, the Tribes go roaring back to the west. Galway is a hurling county in its soul and on an inky day in Croke Park, their team completed a season in which they refused to blink or buckle. There would be no collapse, no falling short, no doubts. All summer, Galway have looked like the best hurling team in Ireland and they confirmed that in the only way they could. They won in September.

What a wonderful and nerve-wracking day, one of the few All-Ireland showpieces not featuring the landed gentry of the game, but belonging instead to two of the game’s finest outsider counties. For the neutrals, there could be no loser on this day but inside the stadium, inside the counties of Waterford and Galway, everything was riding on the outcome of this match.

Both places had reasons to almost fear these days as they shared recent memory of only the darker side of All-Ireland final magic. Waterford’s reinvention under Derek McGrath has been singular and gloriously independent in spirit. But there was a quiet, unspoken obligation on this physically imposing and deeply talented Galway team to complete the year: to get this done.

They could not fail. They didn’t. 0-26 to 2-17: the circle dating back to 1988 completed and a full haul to finish the year: league and provincial champions and now All-Ireland minor and senior winners as well. Look west in envy. The bonfires will burn in the plains of east Galway and the revived clubs in the city for a fair few nights to come.

“It is everything I have ever dreamed of,” said Joseph Cooney, the son of the supreme 1980s talent Joe, and immense in this match. “It will take a long time to sink in.”

He probably spoke for the county there. Since ‘88, it was as if some voodoo infiltrated a series of smashing hurlers – fliers, tricksters, stylists, old-fashioned defenders – to emerge for the county and fall short in one way or another. Six All-Ireland final losses: recovering the McCarthy had become a kind of psychological warfare for Galway hurling people. What made this year different? At the heart of it stands Micheál Donoghue, rigorously understated and icily determined in a two-year stewardship in which, he insisted, he invited the players to take responsibility for themselves. 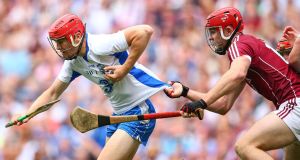 “Of course there would be pressure. We got to the final again. The biggest thing for me, knowing the sacrifice and effort these boys put in, was what they would face next week if they didn’t win. Since the Wexford [League] game these boys have taken huge ownership. They have been questioned and doubted so many times and even in the build up to the game there were still references that they were chokers. Nobody ever came out and said that these boys have shown huge resilience. The unity that has been built in this squad showed in abundance.”

They were unwavering. From the first whistle, Galway gave a dazzling tirade of near-perfect hurling, from Joe Canning’s opening point over his shoulder to David Burke easing into a flawless performance around midfield. They fired four points before the band had made it down the tunnel. McGrath conceded that he gulped during that blizzard and memories of the ‘08 evisceration by Kilkenny crossed his mind.

“That storm came fairly quickly and that was in our minds. I couldn’t help thinking on the line, ‘Jesus, this is coming again. Galway are primed’.”

They were. The maroon team had 0-14 posted at the break. Twelve of those scores were technically gorgeous strikes from play. But the usual jitters tormented the crowd at half-time because Waterford – sticky, tough-minded, hugely brave – were right there with them. A goal-from-the blue by Kevin Moran and then another in the 22nd minute after nobody could get a touch to Kieran Bennett’s long, probing ball into the square left the day up for grabs. Jamie Barron was again in full-wattage mode and gradually the Waterford collective came to impose their shape and rhythm on the game. It would have been easy for Galway minds to believe that the gods were conspiring against them again.

“Physically it took everything,” Joseph Cooney would remember. “After doing all the hurling and only being a point up, you’d be saying: Jesus. But when they got on top in the second half it just took Niall [Burke] coming in and Jason [Flynn] coming in. They brought that extra bite. Not necessarily scoring but Niall caught a few balls for frees. That has been the panel this year.”

Somewhere in the background of this maroon shaded day was the memory of the irrepressible Tony Keady, the late Galway folk hero. A sustained applause rang out through the sixth minute of the match. As it happened, the stadium announcer was just finishing a half-time tribute to the Kilimordaly man when the Galway team returned to the pitch, tuned in to the task at hand. He was foremost, too, in the mind, of David Burke in an emotional acceptance speech which paid tribute to Niall Donohoe, the late Kilbeacanty man who played with most of this team in the 2012 final.

High in the stands, Conor Hayes, the last Galway man to lift the MacCarthy Cup, sat surrounded by the paraphernalia of the radio broadcast. He is among the cast of managers who came close with Galway in 2005. That year belonged to a litany of almosts and what-ifs that date back to the 1990 goal-rush by Cork and a succession of heart-breaking days that had, alarmingly, become Galway’s September story.

That was the huge, unseen pressure which this Galway vintage played through in a taut, nerve-wracking second half. The day threatened on them – Moran, lionhearted for the Decies all summer, broke clear and had a chance to put Waterford two up after 47 minutes. But the shot tailed left and wide and then the Galway men summoned the reserves of courage and belief they had been squirreling through the black winter: big, plundered points from high balls by Niall Burke and a pair of wonderfully insolent scores by Jason Flynn that seemed to banish the doubts.

Galway voices came from the stands, tentative at first but in full volume as the game trickled into injury time and the maroon team holding a three points lead. There are no guarantees. A host of brilliant hurlers – names like Cloonan, Rabbitte, Kennedy, Hayes, Kelly – passed through a lifetime in maroon shirts without knowing the joy of this day. The 15 had to see it out, steer it home.

“Everything started falling into place for us,” said Donoghue of the year that was different. “Our mantra was: the next game. Everyone bought into it and Jesus, it is sweet, now, I can tell ya.”