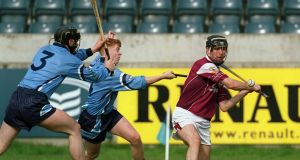 Francis Forde in action against Dublin in 2002. Photograph: Lorraine O’Sullivan/Inpho

When the Galway footballers shot like a comet across the sky in the summer of 1998, Francis Forde was struck by what seemed to be an inherent know-how among the group.

The Turloughmore man enjoyed All-Ireland success as a player and coach at under-age level with Galway but was as flummoxed as everyone else as to how to translate the emerging talent into a senior All-Ireland.

“When the footballers came through in ’98, they had all that tradition behind them and they grew when they went to Croke Park in ’98. It was amazing to watch how they progressed as a young team. They took the place over when they got to Croke Park.”

His point is that it takes time and patience to acquire an All-Ireland tradition. Galway’s period of hurling splendour in the 1980s – the awakening in 1980, dual September losses in 1985 and ’86 and then the back-to-back All-Irelands of 1987/88 created an expectation that the maroon future would always be like that. The work was done and Galway seemed to produce dazzling 17-20 year old hurlers in a way that made the establishment counties whistle in envy. But the senior follow-on didn’t happen.

“At the end of the day, what that talk didn’t factor in was, whether we like it nor, we don’t have a tradition of winning All-Irelands. So, yeah, we were able to win minor All-Ireland and to a lesser extent under-21 All-Irelands, but bringing players through and getting them to win a senior All-Ireland is a whole different ball game completely.

“As a county, we don’t, and we didn’t, have huge experience in that regard. That means if you don’t have that experience to draw on, it becomes more of a challenge. That remains a massive a challenge.”

The flip-side was that the GAA wasn’t fully sure what to do with Galway for many decades. What the 1980s sides managed to do better than anyone was to come into All-Ireland semi-finals and somehow reach the pitch of the championship. In the 1990s, Galway struggled to emulate that. Forde played in the championship meeting with Waterford in 1998. After a torrid Munster final replay, it was Waterford’s third game in three weeks. It was Galway’s first competitive game of the championship.

“You were coming in cold. To say Waterford were battle-hardened in ’98 would be an understatement. They did really well that day against us. Tony Browne was phenomenal. It was probably over before we knew where we were.

I remember coming on but I don’t know what the score was at half-time. That game was only going in one direction. Tony was excellent for them. There was debate in the lead up to the game if he’d even be fit to play after that Munster final. Go back to our time 20 years ago, you didn’t get to play many matches. I played in ’95 semi-final against Clare. You played New York before that. You got one top championship match and you then had to wait a year for the next one.

“In 1997, we had the backdoor which meant we got to play Kilkenny in a quarter-final who had lost the Leinster championship. As the backdoor system changed, lads got a group of games for a while. Going into Leinster, if you look at the squad and the amount of games played, it is through the roof by comparison with Galway players from most other generations.”

And that may have been the big change. This is Galway’s third All-Ireland final appearance of the decade and they missed out last year by a solitary point in the semi-final against the eventual champions. The consistency is readable and it has led to a gradual change of mindset. The old tendency to wipe the board clean after a championship defeat is no longer there. This side has been building and learning.

There hasn’t been a now-or-never feel about Galway in recent summers. It’s a trait they share with Waterford and it has taken them this far. It is going to get one of them over the line.

All-Ireland finals are loaded days for Galway, in particular, but Forde believes that on Sunday the emphasis will be on the game. He believes this squad can take the myth out of the final and simply apply everything they have been doing all summer to the 70-plus minutes.

“That’ll be our focus, to try and improve on our performance from the Tipperary game. All we can focus on is trying to get our performance right for the next day. And hopefully, we’ll get the level of performance we’re looking for and hope that’s good enough. If it is not, you have to take it on the chin and everything that goes with that. We’ve been there before. If you believe in something, you stick at it and take the consequences and outcome at the end of it.”