GAA Statistics: Mixing the short with the long can solve Kerry's kickout conundrum

In the last two big defeats to Dublin, The Kingdom have lost 17 of their total of 49 kickouts 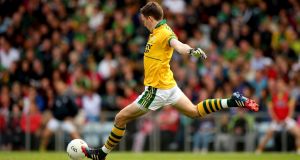 Brian Kelly: the Killarney Legion man has started all three of this summer’s matches, ahead of Brendan Kealy who was last year’s All Star goalkeeper. Photograph: James Crombie /Inpho

Just how bad can the Kerry kickout be, that the county is afire with talk of midfielder Bryan Sheehan playing in goal for this weekend’s All-Ireland semi-final showdown with champions Dublin?

The 30-year-old All Star midfielder of five seasons ago represented his county at minor level between the posts, and also won a Munster schools title with Coláiste na Sceilge playing there. That was 14 years ago.

Kerry have had a trouble-free path to the last four this summer – just three games, all against Division Three opposition, Clare (twice) and Tipperary. The average winning margin has been 11 points.

Nonetheless, their own kickout has come under scrutiny, and with the All-Ireland champions next up the panic button has been sounded.

Kerry though are fortunate to have two talented goalkeepers vying for the number one spot. Brian Kelly of Killarney Legion has started all three of this summer’s matches, ahead of Brendan Kealy who was last year’s All Star goalkeeper. And truth be told his kick-out has not been that bad, not at all.

He has found a man with 72 per cent of them. And when you consider that 54 per cent of his restarts are hit long, to find a man beyond the 45 metre line, that percentage is to be appreciated.

Whereas most modern goalkeepers are going short with a majority of their restarts, Kerry have done so with only 10 per cent of theirs. So in three games, Kelly has only taken the option of finding a man inside 25 metres, on just six occasions.

With Kieran Donaghy operating at midfield, alongside either David Moran, Sheehan or Anthony Maher, Kelly has opted for a long kickout over half of the time.

While 36 per cent of the time he has opted to find a man in the middle ground – just between the edge of the D, and outide the 45.

In terms of variety, Kerry haven’t really mixed things up too much so far. Their midfielders are a consistent, albeit predictable outlet, taking a side each, while they and the half forwards are also the main targets for the shorter restarts - again running towards the wings. 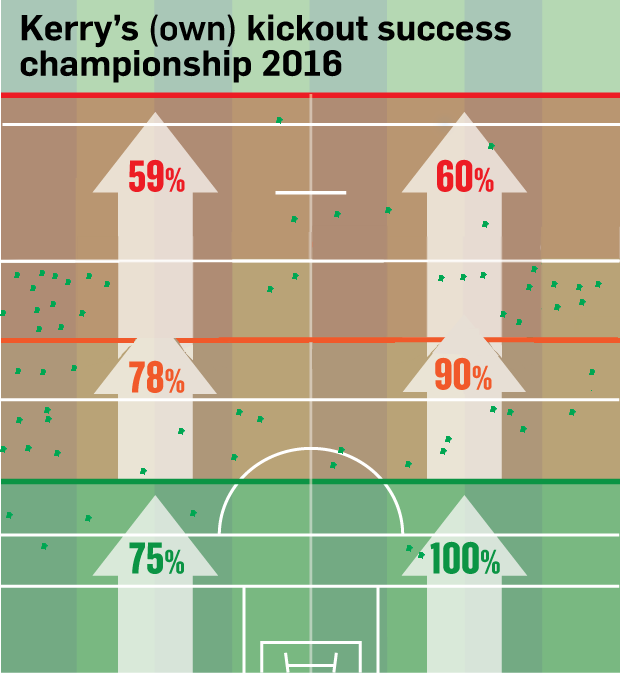 With the long 50:50s being sent out away from the centre, the danger of being caught out on an overlap if that contest is lost is largely diminished.

In three games only nine Kerry kickouts (long or short) have been delivered down the centre.

The lack of variety then accommodates a zonal marking approach for their opposition. Covering the middle ground and the wings forces a contest – which Kerry still would fancy themselves under – or a very short restart which Kerry do not seem to fancy as much, despite their success in claiming possession from such a strategy.

Kerry lost a total of 19 of their own kickouts in the Munster semi-final and final wins over Clare and Tipperary – and Clare again in the All-Ireland quarter-final.

Only five of those though were inside their own 45 - and therefore lost due to a lack of movement and poor execution - the rest were simply a case of being beaten in the contest.

Kerry also hit two kickouts (in three games) beyond the middle of the field with a low trajectory towards an isolated half forward. They won one and lost the other, but this is a tactic they are likely to use again, with opposition eyes stuck on the usual zones. This being the sort of variety they need to introduce plenty more of.

Much of the criticism of Kerry’s kick-out though stems from the last two times they met Dublin in knockout games – this year’s league final and last summer’s All-Ireland final.

Kerry of course lost both finals, losing 17 of their 49 kickouts along the way. In those two games Dublin lost only eight of Stephen Cluxton’s. That being against a Kerry side who do press the opposition’s kickout to great effect, and win the majority of ball that is kicked in any way towards an aerial contest around the middle.

He was though less successful with his longer kickouts then Kelly has been this summer. That could be due to the intensity of the opposition, the accuracy of the delivery - or most likely a combination of both.

Overall in 2016 though Kerry have conceded just nine goals in 12 games so the goalkeepers have been doing well, with Kelly playing in seven of those games and Kealy the other five.

But the main worry for fans travelling from the Kingdom this Sunday will not necessarily be their goalkeeper’s shot-stopping ability, but his kickouts.

And with it highly unlikely that Sheehan will actually drop back it’ll again be between Kelly and Kealy for the starting place between the sticks.

If Kerry can add a little more variety, trading their reliance on long kickouts - or riskier ones to the middle ground - for some shorter, safer options, they will be well served.

To achieve such though they will need to speed up their restarts. In those three games the average time from the ball landing over Kelly's head for a score or floating either side and wide - to him taking his restart - 14 seconds. This will need to be quicker against Dublin.

Beyond that, with their big men around the middle - when most of the ball is kicked out on top of them (sideline side) there’s only so much the goalkeepers can be blamed for.