GAA Statistics: How do Mayo get the best from Aidan O’Shea?

Depending on the time of the game, the Mayo talisman must be used in different roles 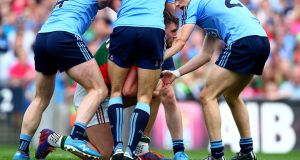 Getting Aidan O’Shea into the game on Sunday will be the decisive factor in Mayo’s bid to end their 65-year wait for All-Ireland glory.

“This thing has been put out there that Dublin are vulnerable in their full-back line, particularly in the air. But I haven’t seen too much evidence of it yet...They handled Aidan O’Shea with ease last year.”

That’s the view of Kerry manager Eamonn Fitzmaurice. He, like much of the country, follows the general consensus that Dublin under Jim Gavin have O’Shea’s number.

That view is based on the teams’ last three championship meetings in which, both at midfield and at full-forward, his influence has been minimised by the blue machine. That is not due to the loss of an individual battle, or the failure to stand up and perform on the big occasion – there isn’t a Dublin player who would match up in an individual battle with the Breaffy man.

The tenacious Philly McMahon, aided by Cian O’Sullivan and the rest of his defence, however, snuffed him out at full forward last year.

Two years earlier and Stephen Cluxton and the middle eight combined to stretch and overrun him as a midfielder.

So what do Mayo do to get the best out of their talisman?

Well, no one size fits all in this case.

Playing most of both last year’s drawn and replayed semi-finals against Dublin at full-forward, he would score just one point.

In the second game, which ended in defeat for the Westeners, he would receive seven long, high balls in on top of him in the first half alone. Not one of these stuck, and not one scoring opportunity was created. 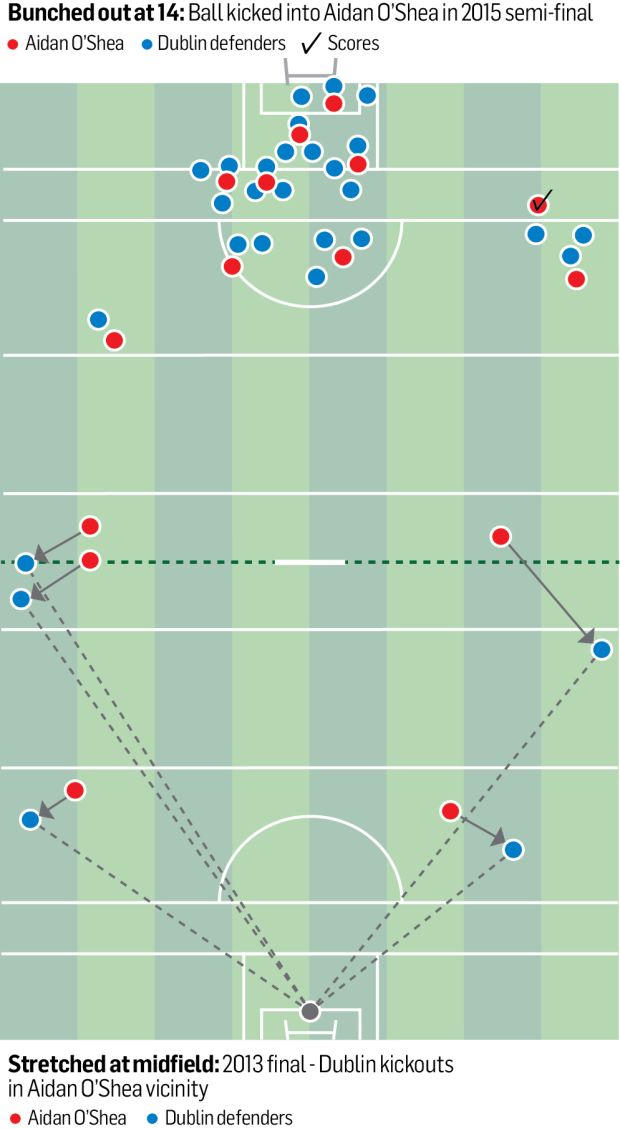 Of the 10 balls kicked into him inside the Dublin “45” during that match he would be at least double marked on all but two occasions – once collecting coming out beyond that 45m line, the other time in a right half forward zone. It was on this occasion that he got his score.

For the rest he also occupied the attentions of Cian O’Sullivan dropping back, and for those that came long and high another defender also had time to come across and bunch things further. In the final quarter of that replay O’Shea would touch the ball only once as his team reverted to their strengths and ran the ball. With him left wasted inside.

Ahead of the 2013 All-Ireland final between Dublin and Mayo, O’Shea, operating as a midfielder, was hot favourite to get the Footballer of the Year gong. However, over those 70 minutes in Croke Park he was ran from stand to stand as Cluxton stretched Mayo with his restarts. Still kicking long, he engaged Mayo’s imposing midfield yet still isolated them in a sprint to the wings rather than an aerial contest. Just five Dublin kickouts came to O’Shea’s vicinity, and he was chasing well behind his marker for all of them.

And then you have to factor in the most significant price Mayo pay for the brilliance of O’Shea. While he may excel in the middle third, breaking tackles, fielding ball and turning over possession in inspiring fashion - in terms of his ability to follow his own man or track runners the 26-year-old can certainly be exposed.

In that 2013 decider his marker Cian O’Sullivan would score a point, while Denis Bastick would emerge from the bench to create Bernard Brogan’s decisive goal. With O’Shea nowhere to be seen. He was targeted, and overran in the middle.

As for last summer’s replay, Philly McMahon scored 1-2 off him from the full back line.

“I enjoy the two roles: being out the field, creating things, touching the ball a bit more and influencing things; I like being inside too, the danger thing of scoring scores and making scores,” says Michael Murphy when asked about his position for Donegal.

O’Shea, like Murphy, is a marked man, and hence operating in the one role makes him far too easy to box off. Therefore the question is: at what stage in the game is O’Shea needed, in which position?

It is during this segment that O’Shea should be pushed into the square, with an avalanche of long balls unleashed on him.

All he needs is one to land in the right area, as he showed against Donegal last year. His presence will also act as a decoy, freeing space for Mayo to mix in their running game.

On either side of that sector where Dublin are at their most dangerous he would be best served further afield, leading that running game rather than waiting in the forward line. Floating from centre forward rather than midfield, where he will not only occupy the attentions of sweeper centre back O’Sullivan but he is also in less danger of being exposed defensively.

It may take a lot of coming and going for one man, but to beat Dublin Mayo must have O’Shea at the heart of things.

And the tactical scurrying will be worth it to end the most painful wait in the history of Gaelic football.

This will be an eighth final for Mayo since they last won an All-Ireland in 1951, and still no winning ticket.

In post-war times no other team has lost any more than four finals before finally claiming Sam Maguire. Dublin were one of those in 1995, Galway did it in 1998, Cork in 2010 – if Mayo do the business on Sunday they will have suffered double the heartbreak.

But with O’Shea leading the charge they will at least be better fixed than in their last three encounters with the reigning champions.