These players have worked too hard, put too many hours in and get so little in return 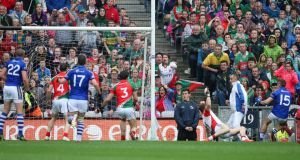 Kerry’s James O’Donoghue (15) finds the net to give his side a late reprieve against Mayo.

A headline posted recently on the bleacherreport.com warned that next Saturday’s NCAA football opener between Penn State and Central Florida scheduled for Croke Park is “Threatened by Potential Volcanic Eruption”.

It was too much to hope that the good people at Bleacher had somehow pre-empted the unholy reaction of David Brady and other Mayo stalwarts to news that that Mayo and Kerry’s All-Ireland semi-final replay was being shifted to Limerick to facilitate a game of American football.

Alas no, they were merely referring to the smoke emanating from Iceland. In keeping with the general theme, the county teams and fans weren’t on the agenda.

Mayo manager James Horan chose the perfect word is his post-match reaction to news of Kerry and Mayo’s being bumped to an off-Broadway venue. “Bizarre” just about sums up a situation which has Aidan O’Shea and Declan O’Sullivan running through their warm-ups for a huge championship match in a provincial ground while, on the same afternoon, Christian Hackenberg will be seeking to enhance his pass-completion record for the Nittany Lions in the GAA’s theatre of dreams. It is bizarre and unprecedented.

Television viewers still reeling from the truly brilliant drawn match on Sunday must have assumed they misheard Michael Lyster declare that the replay would go ahead on Limerick on Saturday. Limerick! On Saturday? Why? At 5?

Within minutes the reason became clear. Speaking from Croke Park on RTÉ radio less than an hour after the match, former Kerry player Michael Quirke noted that cheerleaders from Penn State had taken the field to go through a practice routine. His tone was lighthearted but the observation contained a highly relevant point. Once the full-time whistle went on Sunday, American football was the only game in town as far as Croke Park was concerned.

The Croke Park Classic is a heavyweight money spinner. Sixteen thousand Americans flying in, 4,000 gridiron fans from around Europe and an estimated €30 million for the economy: what’s not to love? Speaking on Today FM recently, Croke Park commercial director Peter McKenna emphasised the razzmatazz- the tailgating, the cheerleaders, the parachutist landing with the match ball, the Dublin Gospel Choir. It sounded great. Meanwhile, in the Gaelic Grounds, there’s a fair chance the immersion will be switched on for the local lads.

The GAA has already lined up another American football classic for 2017 and hopes to host one every other year. Because it must be scheduled as a season opener in August, the busiest month of the GAA calendar in Croke Park, the GAA limited its options for replays in the All-Ireland championship. They must have silently hoped that this situation wouldn’t come to pass. And fingers-crossed is not good enough.

It could be argued that the main fault lies in the overall All-Ireland season scheduling. Mayo started their championship quest in the Bronx on May 4th. Their next match was on June 8th. They then played and won the Connacht final on July 13th. Three games, three months. Kerry, meanwhile, finished their league programme on April 6th and waited until June 22nd for their next competitive match, a Munster semi-final against Clare. They won their provincial final against Cork on July 4th. So an All-Ireland championship which begins with huge gaps between games demands that two of its last four teams prepare for a season-defining match with just a six-day turnaround. There is no reason why this stage of the season needs to be so congested.

Even within the existing framework, there is no reason why Mayo versus Kerry can’t take place on Saturday, September 6th. The official explanation – that the GAA had to take into account the possibility of a draw between Dublin and Donegal next Sunday – is flawed. It inadvertently suggests – or perhaps betrays- the sense that the Dublin/Donegal fixture is somehow pre-eminent in the minds of those who run these matters. On Sunday evening, a Dublin/Donegal replay was a relatively faint possibility. A Kerry/Mayo replay had become a reality. Why not give that replay the September 6th slot and release a statement clarifying that should the Dublin/Donegal semi-final finish in a draw it would (a) take place in Croke Park as part of an All-Ireland semi-final double header with preference given to ticket-holders from the drawn match or that (b) both matches would take place in Croke Park at 2pm and 6pm, allowing the stadium to be cleared after the first match or (c) that the Dublin/Donegal replay would take place at an alternative venue, with all the attendant romance/novelty that comes with the rarity of Dublin playing championship matches on the road.

For neutrals, there is something tantalising about the pure novelty of a Saturday evening All-Ireland semi-final in Limerick. It is something unexpected – and less of a hike for both sets of supporters.

But that is not the point. The situation isn’t fair on either team. It means Mayo must travel and play in a venue which Kerry are well used to.

This is not to suggest it gives Kerry an advantage, necessarily: few teams respond to the liberation of playing in Croke Park as consistently as Kerry. There is no question that they would prefer to be going back to the Jones Road.

When teams reach the All-Ireland series, they are mentally locked into the idea of playing in Croke Park for the remainder of the season. It is a sacred place: playing there has always been regarded as something a reward in itself. To tamper with that is unfair on teams and managers. They work too hard, put too many hours in and get so little in recompense. They shouldn’t be jerked around.

This latest embarrassment leaves the GAA more open than ever to accusations that money is the first and last consideration in its reasoning.

The bottom line is that Kerry and Mayo are playing in Limerick this Saturday to safeguard the possibility of a Dublin/Donegal draw and another full house in Croke Park on September 6th.

So a championship season which began with the controversy over the Sky broadcasting rights deal and had the Garth Brooks fiasco for its half-time entertainment is finishing by rewarding two teams which thrilled the country with the match of the summer with a take-it-or-leave it replay in Mick Mackey’s old stomping ground.

The American visitors would recognise this for what it is. The GAA has fumbled the ball.