GAA get that Friday feeling 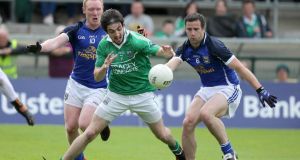 Arrangements for round one of the All-Ireland football qualifiers include the first championship fixture scheduled for a Friday night, as the meeting of neighbours Laois and Carlow is set for Dr Cullen Park on the evening of 28th June.

A hurling qualifier between Offaly and Limerick took place in Thurles on a Thursday night in July 10 years ago but this will be the first weekday match since – not counting a number of bank holiday Monday fixtures.

As policy Croke Park has stated that because of difficulties involved in players getting of work, Friday night matches would only be considered in the case of neighbouring or local counties, matches that wouldn’t involve much travel.

There are three fixtures not yet finalised. Offaly-Tyrone, Louth-Antrim and Westmeath-Fermaagh are complicated by the involvement of Offaly, Antrim and Westmeath in this weekend’s hurling qualifiers. As soon as they are complete it is expected that the Central Competitions Control Committee will organise the remaining details.

Derry’s match with Sligo is being held in Owenbeg, the county’s second ground, which was just recently granted licence by Limavady Borough council to host crowds of 6,800. Celtic Park, the usual venue in Derry, is unavailable on the weekend because of Féile na nÓg, which is being hosted in the county the weekend after next.

Galway, on the receiving end of a Connacht hammering from Mayo, will host Tipperary with Alan Mulholland’s team looking to rectify the county’s poor record in the qualifiers, which has seen them win just one match – against Louth nine years ago – in the 12 years since becoming the first county to win an All-Ireland through the qualifiers in the inaugural year of the format.

Pairings revisited include recent qualifier specialists Limerick against Longford, who they beat last year, and Wicklow’s trip to Armagh, which will revive memories of the draw and replay, won by the Ulster side, two years ago.

Winners will play the provincial semi-final losers in round two. Already in that pot are Waterford, Clare and Roscommon.

All-Ireland SFC qualifiers, round one