Formbook points to Kerry and Mayo easing into semis 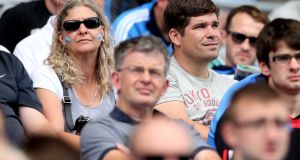 Kerry manager Eamonn Fitzmaurice keeps a watching brief at the Leinster football final between Dublin and Meath at Croke Park last month. As respecters of tradition, Kerry football people will always tip a cap to the maroon of Galway. Photo: James Crombie/Inpho

There is no turning back now. Croke Park has been mowed and polished for the first of the season’s All-Ireland football quarter finals, with last year’s All-Ireland finalists Mayo taking on a young Cork team in the second of the afternoon double-bill. The opening match has a distinctly aristocratic aura: Kerry play Galway.

It seems like an age now since the dry autumn afternoon when Colm Cooper, playing in the black and gold of Dr Crokes, Killarney, collided awkwardly with a Castlebar defender and suffered a cruciate injury which would rule him out for the season. The disappointment was general and the judgement instant: without their playmaker, Kerry could not contend for the highest honour.

And yet here they are, back in Croke Park as Munster champions for the 76th time and favourites to advance to the last four. For the second year in succession, Eamonn Fitzmaurice has achieved the rare feat of hiding his Kerry team in plain sight. They were laboured in the league, simply doing enough to survive.

They were ordinary against Clare in their first championship match and then came that scarifying afternoon against Cork when they announced that they just might be able to win without Cooper after all. The bookmakers scrambled back to redraft their odds.

As respecters of tradition, Kerry football people will always tip a cap to the maroon of Galway. The westerners may only have won six of their 19 championship meetings to date but they include the All-Ireland final wins of 1964 and 1965, consecutive defeats not lost in the Kerry archive.

They have flashed with enough scoring potency against Mayo and Tipperary to place Fitzmaurice on high alert and Croke Park tends to have the same affect on Galway teams as if does on Kerry teams.

They play like they belong there. Galway have not won a match in Croke Park since the All-Ireland final of 2001, a lopsided fact that nags at them and disguises the excellence of several performances, not least their hour of splendour in the rain against Kerry at the same stage of the competition six summers ago. Publicly, Galway have demanded a performance of themselves. Privately, they will be looking for a win.

And what of Cork? Was that Munster final a chimera? Their share price has taken a hammering since they began posting ominous scores during the league and Brian Cuthbert’s team will face Mayo with big questions to address.

Cork and Mayo have bobbed and weaved since. 1993 is marked by the unholy beating which Cork handed out to Mayo, 2011 the year when this current version of Mayo flamed out of nowhere to relieve Cork of their All-Ireland title.

This instalment is flavoured by remarks emanating from the Cork camp suggesting that Mayo have become masters at the art of the deliberate foul, a comment which was frostily rejected through a statement from the Mayo County Board.

Of the four counties playing in Croke Park tomorrow, Mayo are, on paper at least, the model of reliability, immovable in Connacht and good as their word in returning each year even more streamlined and competitive and hungry than before.

But it is no secret that only an All-Ireland title will mean a successful conclusion to their season. The big question is whether they can return to the September stage for a third consecutive year. Only then can they begin to address the question of actually winning it.

The permutations are intriguing: the day could end with yet another instalment of the great southern rivalry or a first ever championship meeting outside Connacht between the big two of that province.

Perhaps that is a reflection of the games to date. So far, the All-Ireland championship has run along expected lines and any departure from that tomorrow would make for the first real shock of the season.