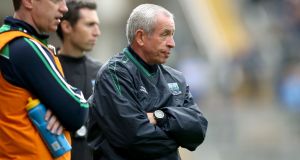 Fermanagh free-wheeled to victory to deliver a winning homecoming for Pete McGrath in Páirc Esler.

While new Down manager Eamonn Burns got a sobering reminder there could be a difficult season ahead, it was far too easy for Fermanagh in yesterday’s McKenna Cup clash.

An inexperienced Mourne side, shorn of around a dozen first team regulars, failed to score for 20 minutes in both halves with Fermanagh playing with a cohesion and purpose they could not match.

Pete McGrath won two All-Irelands in the nineties with Down and he had a satisfying day back to face his native county for the first time.

Sean Quigley hit all of his side’s six second-half points in a game utterly controlled by the visitors.

Fermanagh were far slicker and scored the opening four points inside 16 minutes, Tomas Corrigan with two of them.

Mis-placed passes and wrong options hurt Down, who failed to score until Darragh O’Hanlon converted a free after 20 minutes.

Fermanagh regained control scoring four of the next five points in the 10 minutes before the interval to lead 0-8 to 0-4.

Caolan Mooney and Barry O’Hagan hit early second-half points for Down but Quigley led the scoring as Fermanagh coasted to victory.

A late Connor McAliskey point confirmed the narrowest of wins for Tyrone in an epic encounter at Owenbeg.

The Oakleafers had led for most of the game but a red card to full forward Emmett McGuckin in the 41st minute opened the door for a Tyrone comeback, who hit 11 of the next 14 scores to win by a single point.

The win all but confirms Micky Harte’s team’s passage to the semi-finals, while Derry, who have scored heavily in the competition so far, can still qualify as best placed runners-up.

Despite fielding a number of changes Damian Barton’s side began where they left off against Antrim and led 2-4 to one point after 22 minutes of play. Benny Heron, making his first start of the season, slid home Derry’s first goal while Ryan Bell buried a 21st-minute penalty past Michael O’Neill.

Derry were superior in most sectors of the pitch in the opening phases and with goalkeeper Thomas Mallon’s laser-guided kick outs were certainly on top in the middle third. Conor Murphy was prominent with his ball carrying while twin towers up front Bell and McGuckin were again proving a handful for the Red Hand defence.

With the introduction of Mattie Donnelly, Tyrone finally hit their straps for the remaining 10 minutes of the first half, and the slick movement and hand speed that had guided them to that early season O Fiaiach Cup win over Derry came to the fore. The reigning champions fired back strongly to run in just two points adrift , trailing 2-4 to 1-5 at half-time. Patrick Quinn drilled home the Tyrone goal.

Bell opened the second-half scoring for Derry but Tyrone assumed control of proceedings soon after, particularly after the McGuckin dismissal. Back to back Richie Donnelly points handed the visitors a three point lead by the 52nd minute as the Red Hands took full advantage of 14-man Derry.

Derry battled back and goals from Bell, with a second penalty, and Mark Craig, edged Derry back in front at 4-05 to 1-13.

Three successive McAliskey frees, however, regained the lead for Tyrone who showed all their experience to hold on for a single point win over the old enemy.

With as many as nine different players hitting scorers for Harte’s team, and a second win in succession over their near neighbours this season, it was a particularly pleasing day for the Tyrone manager. Harte, however, did acknowledge that it was a far from perfect display by his team.

“Aye, there’s encouraging performances and lots of work to do. We were cut open too many times. To concede four goals you would never be happy with that. Yes it’s nice to win the game. It’s nice to come back from a big deficit but there are lots and lots of things to work on and that’s not just small talk. The video evidence will show that to us.”

Harte’s opposite number Damian Barton was smarting after the 41st-minute dismissal of McGuckin.

“We’re disappointed you know. I’m disappointed we didn’t win the game. We were the better team. The turning point of the game was our full forward getting sent off. Just on that point I thought they got a few easy frees. We would be concerned about our number of points but we’d also be concerned that favourites generally get the run of the decisions. I just thought that a couple of decisions that could have went our way didn’t.”

These two teams will meet again in the National League and the Ulster Championship later in the year.

St Mary’s of Belfast pulled off something of a shock when they defeated Donegal in a poor game in O’Donnell Park in Letterkenny.

The defensive minded Belfast College gave the young Donegal side very little room and they took full advantage when Donegal were reduced to 14 men in the middle of the second half; Paddy McGrath seeing red after picking up a yellow and black card.

Paddy Tally’s side were on level terms at half-time at 1-2 to 0-5, the goal from Jack Grogan, their first score.

It was the second St Mary’s goal which sealed the game, Ryan Johnston getting a free run through the heart of the Donegal defence to fire to the net. At the time Donegal were leading by a point, but once St Mary’s hit the front, they took control and added two further points before the end to run out comfortable winners.

Donegal have it all to do now if they want to qualify for the semi-finals. They meet Fermanagh (who are in pole position after two wins) on Wednesday night while St Mary’s are also in contention as they take on pointless Down.

A resilient Armagh staged a strong final quarter to come from being five points down to eke out the narrowest of victories in Clones.

Armagh started in whirlwind fashion with Andrew Murnin opening the scoring with a point a mere 10 seconds after the throw-in and they went on to dominate the exchanges in the opening quarter at the end of which they led by four points to two.

That all changed dramatically after 23 minutes though when Monaghan hit them with an unanswered 1-2 in a four-minute spell, Barry McGinn with the goal in the 23rd minute, and the home side went on to lead at the break by 1-6 to 0-7.

A second Monaghan goal by Owen Duffy nine minutes into the second half put Monaghan five points in front and in a strong position but from there to the finish Armagh dug deep and outscored the home side in that closing period by eight points to two thanks mainly to the accuracy of Stefan Campbell and Ethan Rafferty.