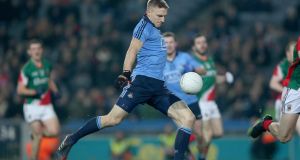 Dublin 3-14 Mayo 2-17: Heavyweight rematches rarely live up to the hype, but this was a brilliant exception – Dublin showing just enough punch late on to ensure in finished on a split decision, and with that denying Mayo the chance to make some amends for their All-Ireland defeat here last September.

It also leaves both teams with one foot in the Allianz Football League semi-finals – with just one round to go. Yet Dublin had to fight long and hard to salvage a draw, the defending league and All-Ireland champions losing goalkeeper and captain Stephen Cluxton to a straight red card on 28 minutes for tripping Mayo forward Kevin McLoughlin from behind, for no apparent reason.

That was only the beginning of a dramatic night in Croke Park, played out in front of an audience of 22,69, as Dublin were trailing by three points as the clock spilled into injury time.

Then Diarmuid Connolly’s smartly taken free found Alan Brogan, who placed the ball beautifully for substitute Eoghan O’Gara – his finish almost taking out the net in front of Hill 16, and his second goal of the night, too. Incredibly, having chased Mayo for so much of the game, Dublin very nearly conjured up a winner, only for Jack McCaffrey’s effort at the death to drift wide.

All this after it seemed Kevin McLoughlin had taken on the mantle of marquee forward for Mayo on the night – hitting 1-3, his first half goal building the advantage that on most other occasions might have seen Mayo hold out. Cillian O’Connor’s calm free-taking also kept Mayo in front for much of the second half, even with the constant threat that Dublin might somehow sneak their way through.

Because it took who else but Kevin McManamon to bring Dublin back into it – his typically opportune goal on 56 minutes reducing Mayo’s advantage to just three points, before Connolly helped reduce that to two, on 59 minutes.

Then Jason Doherty had a goal disallowed on the hour mark, for picking the ball off the ground: then, four minutes later, Mickey Sweeney made no mistake, from close range, thanks to a pass from McLoughlin, who robbed Rory O’Carroll.

Then, after another free from Connolly, O’Gara struck his first goal, which brought them back to within a point – with five minutes to go. O’Connor helped settle Mayo nerves with another point, and a free, and Dublin’s nerves looked to be gone when substitute goalkeeper Seanie Currie kicked out directly over the sideline.

Still, with the clock looking to have run out for Dublin, O’Gara’s late, late strike ensured they maintained the unbeaten run over Mayo from last year into 2014.

Dublin lined out with nine starters from last year’s All-Ireland winning team – while Mayo lined-out with 12 – although starting positions counted for little, as players marked zones rather than any specific opponent. Cormac Costello was also a late replacement for O’Gara.

Dublin did start brightly, kicking the opening three scores thanks to Cluxton’s 45, and points from Alan Brogan and Paddy Andrews. It wasn’t long until Mayo were level, O’Connor and Donal Vaughan providing the best of their scores. The sides were level at five points each on 18 minutes – Mayo then having to replace defender Colm Boyle, shown a black card.

Not long after that Mayo went in front when O’Loughlin latched on a ball half broken down between Rory O’Carroll and Alan Freeman: still O’Loughlin sweetly finished, low and left past Cluxton.

Cluxton didn’t have much time to make amends as he watched the rest of the game from the stands – while Mayo closed out the half with four points without reply, including a spectacular solo effort from Keith Higgins. That left it 1-9 to 0-8 in Mayo’s favour at half-time, but as the second half proved, still all and everything to play for.