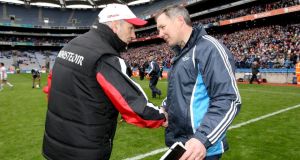 Of the managers’ media conferences after Sunday’s Allianz League final, Jim Gavin’s was more relieved and Mickey Harte’s more relaxed. The Tyrone manager had alibis with two of his best forwards, Stephen O’Neill and Peter Harte out injured, and yet the team had come within an ace of winning the title.

For Dublin the achievement was more about ticking boxes than jubilation over the county’s ninth title and first in 20 years. Gavin’s comments about the victory being primarily validation of the ongoing work the panel was doing rang true.

Brian Mullins said Dublin began to believe nearly 40 years ago when they saw the results of Kevin Heffernan’s fitness regime and how outcomes in matches were being affected – just as the manager had predicted. Trophies are the tangible recognition that what is being done is on the right track, especially for a new manager.

History repeats
History repeated itself in one respect. Dublin’s last five league titles have all been won under managers in their first season: Gavin, Pat O’Neill in 1993 when Gavin was a player, Paddy Cullen two years previously, Gerry McCaul in 1987 and – maybe at the risk of stretching a point – Heffernan himself who returned to take over Dublin in 1978 after a year out when Tony Hanahoe was in charge.

Less promising is the detail that of the county’s nine titles, just two proved to be the stepping stone to a league and championship double, which has previously happened only in 1976 and ’58. In three of the years in question Dublin didn’t even manage to exit Leinster in the summer although the 1991 circumstances of playing four first-round matches of All-Ireland scale against Meath were certainly eventful.

This is however the modern world in which league success has forged far stronger links with All-Ireland credentials than ever before with four such doubles achieved in the past 10 championships. Dublin’s best league in a decade, three seasons ago, preceded the championship in which the team recovered from a heavy defeat by Meath in Leinster to convince themselves in the wafer-thin margins of losing to ultimate champions Cork that they were again contenders.

Spring slippage
A year later, another good spring under their belt, they won the All-Ireland. Spring slippage last year was followed by last-four defeat against Mayo.

Looked at dispassionately there was plenty to be pleased about on Sunday. The title had been won but in a slightly underwhelming way with the show of character in adversity more important than the style of the win. It was achieved without Rory O’Carroll, whose every absence underlines his importance to the defence and its organisation. Understudy Jonny Cooper is a fine defensive footballer but more effective in the half backs. Centrefield didn’t deliver a consistent 70 minutes and the flow of decent ball into the attack stuttered as a result whereas in attack Bernard Brogan was subdued by the above mentioned supply problems as well as a good marking job by Cathal McCarron.

With issues in every sector, Dublin still won. Viewed over the nine matches of the campaign Gavin can look positively at the league in the sense he has used 36 players, including several of his under-21s for the first time, and enhanced the options available. The style of play has been open and at times exhilarating with the team ending as top scorers in Division One but sufficiently protective at the back to ensure the best scoring difference in the entire league. There have been signs however that with the rising levels of competition the defensive game has looked less secure.

The move away from the previous management’s defensive systems might not be the template. Gavin’s under-21 set-up included a defensive screen and when the competitive metabolism has speeded up into hot August arenas, what worked so well in the past three months may not be as effective.

Dublin have looked most at sea in the matches against Ulster teams with a win, a draw and a defeat from the two outings against Tyrone and the one against Donegal – three tight encounters in which the team sometimes looked out of ideas when scores needed to be extracted from defensively minded opponents. It’s to their credit they rescued two of those matches but Gavin and his management will be more interested in sifting through the debit side in the coming weeks.