Westmeath facing a daunting task against the league champions 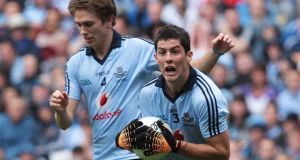 Jim Gavin provided a pretty deft summary of what Dublin face in Croke Park this afternoon, talking up, as any manager would, the strengths of the opposition, as if that will somehow disguise the strengths of his own team.

“They have a strong spine,” he started, “(Kieran) Gavin at full back, (Paul) Sharry at centre half back, (David) Duffy and (John) Heslin at midfield and (Callum) McCormack and the two guys up front, (Denis) Glennon and (Dessie) Dolan. Throw in the scoring capabilities of (Kevin) Maguire and then Heslin from frees and general play, and those names alone mean it’s a very strong side.”

Westmeath must be candidates for the most improved team of 2013, especially given no one gave them any hope of promotion from Division two.

They may have lost that final to Derry (conceding 1-3 in injury time) but there’s no denying their consistency, and yes, their scoring capabilities.

The faced a no-win situation against Carlow in the first round, yet handled it well, scoring 3-15 without ever pressing themselves. Now they face the no-lose situation of playing a hotly fancied Dublin, still fresh from their recent league crowning.

What Westmeath manager Pat Flanagan has been emphasising is the importance of staying with Dublin for as long as possible, preferably by hitting them with a goal early on: what they can’t allow is for Dublin to run at them like they did in 2009.

There is reason to believe Westmeath can’t shoulder up to Dublin. They’re perfectly settled now, unchanged from the last day, with some keen reserves including Denis Cooroon, Ciaran Curley and Damian Dolan.

But Dublin possess wicked pace and work rate that ultimately got them over the line against Tyrone in the league final. They also have the enviable strength in depth.

Rory O’Carroll’s return to full back, with Jonny Cooper switching to left corner back in place of Kevin O’Brien, and Ciarán Kilkenny regaining his place at centre forward (an indirect swap with Bryan Cullen) suggests Dublin are even stronger now that in the league final.

Dublin’s intent should prove unstoppable, especially with Paul Flynn also back on board. The midfield pairing of Michael Darragh Macauley and Cian O’Sullivan are looking increasingly dynamic and if Bernard Brogan hits the ground running then the contest might not last very long.