On All Star trip to Boston, coach says counties would still have an early-season competition 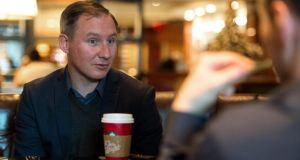 Dublin manager Jim Gavin during a press conference ahead of the GAA GPA All Star Tour 2014 match on Saturday in Boston, Massachusetts. Photograph: Sportsfile

Dublin football manager Jim Gavin has called for the abolition of the national league.

Speaking on the GAA-GPA All Stars trip to Boston where he will be managing the 2013 All Stars against this year’s award winners, managed by former Mayo manager James Horan, Gavin outlined what he believed were inevitable changes to the GAA’s inter-county season.

Approving of the imminent proposals of a high-powered committee to tighten the games calendar by completing the club championships within the calendar year and bring forward the climax of the inter-county championship to August, Gavin said that provincial championships could take place in the spring with the All-Ireland effectively a separate competition, ideally conducted in a round-robin format.

Asked did this mean abolishing the league, he replied that it did but added that counties would still have an early-season competition.

“Absolutely, and no reason we can’t give incentives for teams to do well in the provincial championships – who reach the previous year’s final and get seeded. There are different models you can look at but I like the provincial games.

“Go to any provincial final and there’s great passion in those games, and I think it would be folly to get rid of them.

“I think the national league might have served its purpose and we could move on to a new, group-based championship system.”

“I think there’s momentum there. That should be part of the overall package, but I think there are plenty of models that have been posed out there from the great work Eugene McGee has done with his committee [ Football Review Committee]. But I agree it’s not going to happen next year but large changes will have to happen.

“It depends on the leadership group within the GAA. They’re the influencers in the association. Obviously a proposal has to come from some club or some committee that’s been set up, but there’s no reason why it can’t.”

Would that scale of change not effectively be a long-term project?

“It’s already changed. The qualifier system has changed it dramatically. There are many formats that you can do in a competitive league series and at the same time afford credit to the teams that have done well in their provincial competitions earlier in the season on the road.

“But again things can be pushed out, there is no need why we should all return in January, we have to have a close season as well, I accept that. There is radical change required.”

At present counties have a minimum of seven regulation matches in the national league. For those who do well there are further fixtures in the play-offs. Counties who do poorly in the championship still have at least nine competitive matches in any given year.

Remove the league and that leaves a gaping hole in the fixtures schedule for a number of counties.

Gavin said in his model counties could have additional provincial matches earlier in the year, how many depending on the format and that a slightly relaxed inter-county calendar would free space for club matches. “Is it better than the current system that we have? I think in terms of the championship, certainly it’s something that should be looked at.

“If the league commences in March, and I know the FRC has a proposal to build blocks of time in there for club games, the first challenge is to accommodate the fact that we have two sports competing, hurling and Gaelic football

“But I can’t see a reason why we can’t start the season in February/March and have it finished by mid-August and have the rest of the year for the conclusion of club competitions.”

Traditionally the GAA has been wary of shortening the inter-county championships because the conclusion of the All-Irelands in September has given Gaelic games a significant publicity platform at the start of the season for competing sports, principally rugby and soccer.

Association DG Páraic Duffy was one who had always argued that the promotional window of the All-Ireland championship had to be maintained but in recent weeks he has acknowledged that he has changed his mind on the issue given the gravity of the situation facing clubs and their fixtures.

“It is all about empowerment. It is all about giving them the power to co-ordinate all of it and all of the organisations within the association from the higher education to the provincial councils to Croke Park co-ordinating the All-Ireland series.”