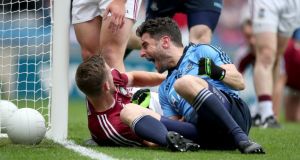 When it comes to Leinster finals these days, we dutifully pan for grains of interest having long since given up on finding nuggets.

Dublin cruised to fifth title in a row and a 10th in 11 years but we knew that would be the case before we arrived at Croke Park so the mere fact of it needn’t detain us for long. They are supreme in the province. This is not news.

But at the same time, don’t imagine there was entirely nothing to see here. If the rest of this year and the next few to come are to be about how Dublin deal with teams who set out to frustrate them, we got a decent insight into what that will look like.

Westmeath aren’t in the same zip code as Dublin but we can say this much for them – they didn’t lay back and meekly accept their fate.

Far from it. Coaches with sparklier reputations than Tom Cribbin have all but thrown their hands in the air when it comes to playing Dublin and yet here were lowly Westmeath – with only a fortnight to prepare, remember – coming up with a decent enough defensive screen to keep the perennial provincial champions to 2-13.

Obviously, Westmeath never came within an ocean of actually winning. They only managed six points of their own, two in the whole of the second half.

Working out how to set up a functioning blanket is possible in two weeks but scheming a way to transition that into workable scoreline of your own takes far longer. It took Jim McGuinness the guts of two years, after all.

Cribbin doesn’t think he’ll always play this way but it’s to his credit that he brought a team up here to try and beat Dublin rather than giving them a canvas on which to paint.

“Our game would be an attacking-style game plan but we weren’t going to take Dublin on like that this year,” said Cribbin afterwards. 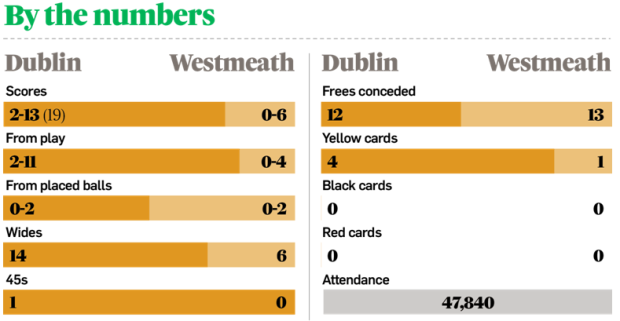 “Our goal always was to get to the Leinster final, to try and beat Meath – that was our big goal, winning three championship matches along the way. Do that and we would deal with the Leinster final when it comes.

“I felt at half-time we were in with a chance. We knew we were going to need goals and that’s the way we set up the second half. We made a couple of changes to try and keep two big men up front so that we might get a goal or two. But unfortunately we conceded two goals at the start of the second half.”

They led 0-8 to 0-4 at half-time having kicked seven wides and been sloppy at times in possession. Diarmuid Connolly, Bernard Brogan and Ciarán Kilkenny mostly held their end up but the rest of the forwards struggled for rhythm and accuracy.

This is what lends the remaining months of the championship its fascination.

It can’t be much fun having to continually switch play over and back to try and find a way through massed defences but Dublin will almost certainly have to do it at least once and maybe twice more before they can walk up the steps of the Hogan again.

Teams who are further down the road at it than Westmeath will have to be dealt with. That’s just life.

As soon as Westmeath players saw daylight in the opposing half, they let fly. Stephen Cluxton can rarely have had a day when so many attempts at points dropped into his chest – nine in the end by our calculations.

Dublin killed the game off with a sharp 2-2 inside the opening minutes of the second half, turning a four-point margin into 12. Paul Flynn, who was otherwise oddly ineffective, battled his way to the endline before squaring for Brogan who palmed home.

Dublin had been squeezing up on the Westmeath kick-out since half-time and when Darren Quinn tried to take a quick one after the Brogan goal, Jack McCaffrey skated in to steal it and fire home a goal of his own.

Onwards for Dublin then, with a quarter-final against either Fermanagh or the losers of the next Saturday’s Munster final replay next on the menu.

Still firm and just favourites for the All-Ireland but not invincible.

Not by any stretch.