Dublin footballers lead the way with 11 All Star nominations 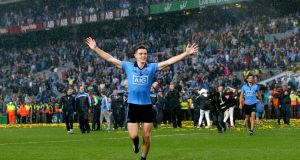 Dublin’s Brian Fenton: the midfielder follows up his man-of-the-match award in the All-Ireland final with a first All Star nomination. Photograph: James Crombie/Inpho

Although there is no place for either Paul Flynn, who has been an All Star for the past four years, or captain Stephen Cluxton, who has not been nominated for the first time since 2010, Dublin lead the way in this year’s short list for the GAA GPA All Stars, sponsored by Opel. The All-Ireland champions have 11 nominations.

By way of compensation Dublin corner backs Jonny Cooper and Philip McMahon are included – two years ago when the county last won the All-Ireland, they were two of the three players (Ger Brennan, injured this year, was the other) who started the 2013 final not to be nominated for that year’s All Stars.

Rookie Brian Fenton follows up on his man of the match display in the All-Ireland final with an All Star nomination.

Overall the county is down one on the nominations list from two years ago: the two other starters from last month’s final to lose out are centrefielder Denis Bastick and forward Dean Rock.

Kerry are next with the defeated All-Ireland finalists gathering eight nominations. Problems in the defence and a rotating selection policy combine to leave just two of the team’s backs in the running: corner back Shane Enright, who has been named on most team of the year selections to date and wing back Jonathan Lyne.

Both centrefielders, Anthony Maher and David Moran, are included as well as half of the attack with reigning Footballer of the Year James O’Donoghue, the long-serving Donnchadh Walsh – favoured to pick up his first award– and Paul Geaney nominated.

Beaten semi-finalists, Tyrone and Mayo finish next with seven each. Tyrone’s nominees include Seán Cavanaghwho is in the running for a sixth award.

Mayo’s seven include Diarmuid O’Connor and Tom Parsons, who are nominated for the first time.

The remaining nominations go to Fermanagh whose representative, full forward Seán Quigley came within a point of being top scorer in the championship, Westmeath (Kieran Martin) and Laois ( Donie Kingston), who all receive one each.

Hurling nominations will be released on Friday and both sets of winners will be announced at the beginning of next month.

This year the system of selection has changed. Outfield players have been nominated in broader categories of defence, centrefield and attack rather than by their line on the field. This was decided on in order to reflect the growing fluidity of positional play with both games.

His 2015 successor will be one of the following: Mayo’s Diarmuid O’Connor, Monaghan’s Ryan Wylie and the current holder of the title, Ryan McHugh of Donegal.

The individual awards will be voted on by the membership of the GPA and the winners will be announced on the night of the awards, which will be presented at Dublin’s Convention Centre on Friday 6th November.