Dublin ease into their stride against Maynooth 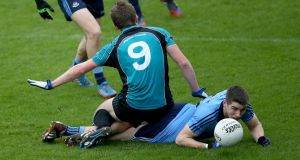 January’s riches don’t normally test the pocket’s stitching and so it was no surprise to see this play out as it did. Dublin went ahead early, led by seven at half-time and by the same margin at the finish. Not quite the scalding Maynooth might have expected in their first ever O’Byrne Cup game but neither was it a clash of equals at any stage.

Jim Gavin put out a reasonably potent Dublin side and then spent the afternoon gradually drawing the sting out of it to see what he had left to work with. By the end, he had withdrawn Dean Rock, Eoghan O’Gara, Denis Bastick, Darren Daly, Tomás Brady and Mick Fitzsimons - Brady apart, All Ireland winners to a man.

Rock, O’Gara and Bastick had run the first half to their own pleasing, Daly had switched in to shut down Maynooth’s most dangerous forward Barry Dardis after he’d snatched a quick 1-2. When they departed, there wasn’t an All Ireland medal left on the pitch. Gavin’s message to his younger orders couldn’t have been clearer - you’re here, let’s see what you can do.

“Yeah, that was part of the logic,” he said afterwards. “It’s a pre-season competition - you want to see players and put them in difficult situations. And there were only five or six points in it there at one stage because they came back strong at us.

“So it was time to see guys make the right decisions on the field of play and put them in scenarios where they have to figure it out for themselves rather than have the more experienced players around them. And I thought they handled it very well and closed the game out well against a very good Maynooth side.”

‘Very good’ is probably tickling the truth a touch. Maynooth came to Dublin to limit the damage and not a whole lot more. Meath under-21 player Dardis was sharp in front of goal but for the most part the game took place in a galaxy far, far away from him.

Ballymun defender John Small planted himself at centre-back for Dublin and held the position all day. Early yet, but it looks like the lessons of the All-Ireland semi-final have been well learned.

In attack, Shane Carthy had a fine afternoon but the winning of the game came down to Rock and O’Gara. O’Gara put in a typically obdurate afternoon at the edge of the square but it was Rock who fizzed around the place as though the game had been put on for him and him alone.

After laying the opening goal on a plate for O’Gara with a gorgeous pick-up and run right at the heart of the Maynooth defence, Rock went on to take no fewer than 12 shots at the posts before half-time. He scored with four of them, hit the post with another and spilled the other seven wide.

For half an hour he was the best player on the pitch by a distance. He looked like the one horse in the field who’d found good ground to run on while the others slogged through the mud. He’ll need to fix his radar though. Seven wides in one half of football is the sort of statistic that lingers.

Dublin led 1-7 to 0-3 at the break and it was humdrum stuff thereafter. Maynooth got the lead down to four points with half an hour to go when Dardis outjumped Fitzsimons before finishing low on the swivel but that was as close as it got. Brady and Carthy drove a couple of points from distance to put them back in their box. Gavin cleared the bench and the afternoon fizzled to a close.