Dublin do enough to overcome Derry as defences dominate 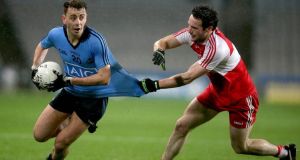 Another game strangled to death by blanket defences and desperate shooting. But in the end, Dublin came through it and Derry slipped dolefully into Division Two football for next year. Brian McIver’s side gave Dublin a strenuous work-out and even led at half-time but the extra quality in Dublin’s forward line won the game in the closing 10minutes.

It is obvious now that a team with true designs on beating Dublin this year will not take the field against them without their blanket double-stitched. Derry came to Croke Park planned and drilled to the last drop. They got their players back, got them marking space and closing off zones, penning the Dublin runners as they came through and pouncing on them when they wondered what move to make next.

When they had the ball themselves, McIver’s side kept it like it was a family heirloom. And if that meant turning to face their own goal and kicking it backwards from time to time, they had no qualms in doing so. It incurred the wrath of the Hill when they did but in a possession game and with 12 and 13 Dublin players often behind the ball, there wasn’t much option for Derry.

Indeed, they were the side that looked far more acquainted with what they were about in the early part of the game. They fashioned the only goal chance of the first half, drawing a smart save out of Stephen Cluxton on 14 minutes from a Benny Heron snapshot. The wrath of Cluxton descended upon his defence - four of them had surrounded Heron and still he got his shot away. It said plenty about how the game was going.

The half-time score was 0-3 to 0-2 in Derry’s favour. Since it won’t take long, we may as well list the scores in order. A returning Michael Darragh Macauley first a point after 11 minutes. Mark Lynch equalised with a terrific kick from distance a minute later. Benny Heron kicked the 45 after Cluxton’s save to put Derry 0-2 to 0-1 ahead and James Kielt stretched the lead to two with a free on 26 minutes.

The last score of the half is probably worth dwelling on for a second. Diarmuid Connolly scored it, planting the ball over the black spot from 47 metres out after a long bout of to-and-fro around the three-quarter-line. This was not a night made for one so beautiful as Connolly and his point had a real to-hell-with-this feel to it. It left Dublin a point down but its quality was nearly worth enduring the first half to see.

Derry didn’t change tack for the second half - why would they? Dublin came at them but moves broke down at every turn. Cormac Costello came off the bench and drew the Dubs level four minutes after the restart but by now the rain was coming down heavily and we went the next 20 minutes with only one score, a Dean Rock free, to warm us.

It put Dublin ahead for the first time and posed Derry the question of how they were going to overturn it. Fergal Doherty was on by now and his old-stager routine worked well for a time. In fact, his was the only moment of subtlety in the Derry forward line, a lovely flick putting Enda Lynn through for the equalising point 11 minutes from time.

But in the end, Dublin found a few slight avenues to barrel down and they scored the last four points of the game. Rock landed a tricky free, Paddy Andrews and Connolly clipped clever scores before Rock closed it out another from play.

They got there but it was heavy going. For them, for everybody.