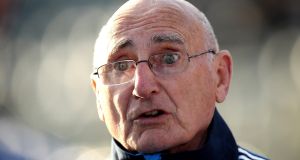 Former Dublin selector Mickey Whelan (78): ‘Our forwards defend and not just by running back. They can tackle without conceding many frees and there’s been a lot done on that by Jim Gavin and his management.’ Photograph: James Crombie/Inpho 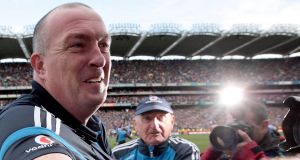 Mickey Whelan was involved in the Dublin set-up when they ended their 16-year wait for an All-Ireland senior title in 2011. Photograph: Morgan Treacy/Inpho

So, Mickey Whelan turns up at a club match one afternoon. He falls in with a group of Dublin football stalwarts and surveys the field. The action isn’t scintillating – one team better than the other but not making great headway – and at half-time, he sighs that there is a “chasm” between these sides. And off he goes.

His audience nod, unconvinced, but sure enough in the second half, the better team opens up and annihilates their opponents. “You were right, there, Mickey,” they all would have said – except that he was gone.

Just as six years ago, having shown Dublin how it’s done as coach in Pat Gilroy’s restorative management, he was gone as soon as the Sam Maguire was back in Parnell Park.

On Sunday, the foundations he helped to put in place will be tested to see if they can be further built upon with a fifth All-Ireland in seven years – a rate of success unseen in the city since the first decade of the 20th century.

At 78, he can contemplate a life that continues to engage. Four years ago, he suffered the loss of his wife Irene and his old friend Kevin Heffernan within a few weeks of each other and he mentions both in conversation, but he continues to give lectures in DCU, conduct research and keep an eye on all sorts of developments, academic and sporting.

Evangelistic about coaching methods which emphasise play and learning in conditioned matches; without skipping a beat, for example, he demonstrates how to tackle when discussing football defence.

The past 10 years have seen Whelan’s status as one of the country’s foremost coaching gurus confirmed and set in stone. Bringing his club St Vincent’s to an All-Ireland title in 2008 paved the way for a return to involvement with Dublin.

He is reticent about giving his views on the current team, anxious not to be seen to hand out prescriptions to Jim Gavin with his three All-Ireland titles in four years.

When Gilroy took over and they had weathered a fierce beating by Kerry in the 2009 All-Ireland quarter-finals, the rebuilding began. For Whelan it wasn’t rocket science but a reconfiguring of how the team would operate.

“At that stage we had [Bryan] Cullen as a wing half-forward and Paul Flynn, a phenomenal athlete. Cullen never wasted a ball and both of them were good fielders so that gave us an outlet. We worked on defence so that all of our forwards could defend.

“You can see that now. Our forwards defend and not just by running back. They can tackle without conceding many frees and there’s been a lot done on that by Jim Gavin and his management.

“There are three phases of a game: when the opposition has possession, you need to get it back and when you have the ball you need to create scoring chances. There’s a period in between when the ball’s in transition so you have to try to cut that out – not just defence but forwards as well and they’re all doing that.”

He is slightly impatient with the emphasis on defence that is generally attributed to the team with which he worked, always pointing out that a key score in the 2011 All-Ireland final came from man-of-the-match, wing back Kevin Nolan, who hadn’t scored before in championship but who had the football and composure to convert the opportunity created by his overlap.

For Whelan, there is a strong belief that Dublin play a traditional and distinctive type of football, marrying technique, creativity and a constant work ethic – something he thinks may reflect a soccer influence in the city.

Gavin has always stressed the same theme and mentions Whelan as one of the coaches from whom he learned a lot.

He doesn’t see 2014 as the great epiphany as generally accepted, simply a tweaking of what was already a robust format.

“This Dublin team has met most of the systems. It fell to one of then, against Donegal three years ago, and they simply adjusted it and refined a defensive game with great attacking opportunities.

“There’s no major change. They’re still attacking. They’re still protecting the ball and moving it through. They adjusted and Gavin did this because he wanted to get it done. He could have gone in another direction.

“If an opposing corner back gets the ball he’s not allowed come out 35 or 40 metres and draw a man on to him and then play piggy-in-the-middle. The forward must pressure him and if the corner forward is left behind, the half forward will pick him up and the corner forward has to get out to cover.”

He believes that Dublin have established a platform for sustainable growth. “It’s reached the point where we don’t need a new team; we just need two a year. That was always the case in Kerry.”

He is hopeful about the short term as well as the long-term future.

“In fairness to Gavin and his mentors, they’re all the time coming up with solutions. Each game has to be played on the strengths of the opposition but you have to have a strong philosophy and a way of playing.”

Then, a quick word about the final with a member of staff and a phone call he decides to take, and he is gone. Things to do.

1 Ghosts and goalposts: The soul of street football in Dublin’s Gloucester Diamond
2 Rugby clubs in crisis: ‘I fear you may find a lot of players won’t go back playing at all’
3 Ian O’Riordan: Dreaming of one-way cycling over the Military Road
4 Federer named highest paid athlete of 2020 as Covid knocks Messi off top spot
5 Anfield and Cheltenham show sports again lacking in looking after their own
Real news has value SUBSCRIBE

Michael Walker: Fans wish to be supporters, not spectators. There’s a difference. 08:00
Ghosts and goalposts: The soul of street football in Dublin’s Gloucester Diamond 07:00
Ian O’Riordan: Dreaming of one-way cycling over the Military Road 06:00
Rugby clubs in crisis: ‘I fear you may find a lot of players won’t go back playing at all’ 06:00
Federer named highest paid athlete of 2020 as Covid knocks Messi off top spot 21:25
Crossword Get access to over 6,000 interactive crosswords