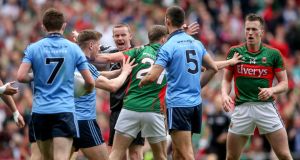 Referee Joe McQuillan awards Mayo a penalty during the semi-final against Dublin in 2015. Photograph: James Crombie/Inpho 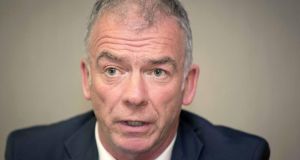 Former All-Ireland referee Pat McEnaney: ‘Joe [McQuillan] cannot be refereeing on history here. You referee the game that is given to you.’ Photograph: Morgan Treacy/Inpho

Expect the worse and move on up from there. That’s how Pat McEnaney advises Joe McQuillan to handle Sunday’s All-Ireland football final.

“People think by making a comment in the media it will influence the ref but this is Joe’s third All-Ireland, he will ref what he sees in front of him,” said McEnaney.

The Monaghan man should know. McEnaney recovered from the 1996 All-Ireland brawl between Meath and Mayo – when he sent off Colm Coyle and Liam McHale – to be considered one of the most sensible whistleblowers in Gaelic football until his retirement in 2011.

“Did you see your man Mané being sent off for Liverpool?”

“All the boys in the studio were going on about all the City players pleading with the ref as if that would influence his mind.”

Match of the Day’s former scavengers extraordinaire – Gary Lineker, Alan Shearer and Ian Wright – all stated they would have gone for the same toe poke over an onrushing goalie and that it was unfortunate, almost bordering on unfair, to see a red card despite Ederson’s face being sliced open.

“The bottom line was the referee got it right,” said McEnaney. “It was a straight red card. Doesn’t make any difference who influenced who. Did he get the decision right or did he not is all that matters.”

McQuillan’s appointment as Sunday’s referee prompted many observers to dredge up his past.

“I can’t think of an All-Ireland final referee in recent years with more pressure on him,” wrote Darragh Ó Sé.

McQuillan has already handled two All-Ireland finals, 2011 and 2013, that ended with Dublin slipping away with Sam Maguire.

“Not only were we playing Mayo but we were playing the referee as well,” said Jim Gavin four years ago.

Mayo were also sour with McQuillan that evening after he told Cillian O’Connor there was 30 seconds remaining just before O’Connor made it a two-point game only to blow up after Stephen Cluxton’s kick out.

“Joe lets the game flow but he is not afraid to produce a red card either,” said McEnaney.

“He has had a pretty good championship. I think he struggled in the league, when his performances wouldn’t have been at the standard he wanted them to be at.

“Come championship, his first game was Meath versus Kildare and that was an entertaining game and he handled the Ulster final, Tyrone and Down, very well and while it was a one-sided game, that in itself in an Ulster final takes managing. Then he handled a cracking game between Mayo and Roscommon. The drawn match.

“Now, did he make one mistake?”

“The biggest thing an experienced ref like McQuillan must ask himself is, ‘Am I up for the game? Am I fully focused?’ Looking at some of his performances during the league it suggests no he wasn’t. It took championship to get him lifted.

“So, an All-Ireland final will be easy for McQuillan. Experienced referees, I found, it’s important not to fall into the trap of – I’ve been here before and I know how it works. You should have a slight bit of nerves.”

McEnaney learned more from the mindset he brought into a provincial decider two years after the calamitous opening exchanges of the 1996 final.

“I always say the biggest learning curve I had as a referee was the Munster final I did in 1998. Cork and Kerry. How they finished with 15-a-side on the pitch is beyond my comprehension, when I look back on it.

“It was a beautiful day when I went down on the Saturday. On Sunday it lashed rain, terrible conditions, but I tried to let the game flow because I had been thinking the day before that the boys will want to play football. The complete opposite happened.

“So, as referee, you should start with – it’s going to be a terrible day with neither team wanting to play football. Start with that scenario and you have all the angles covered.”

Say Diarmuid Connolly starts this weekend. And Lee Keegan goes to meet him. If McEnaney was McQuillan would he do anything to avoid an altercation?

“No. No need to pre-empt something that might never happen. Just have your umpires watch them. Joe cannot be refereeing on history here. You referee the game that is given to you.

“If Joe deems something is rough play he has to set a standard for the game. Otherwise you have to let the next incident go as well. Set a standard so players know what they can and can’t do.”