In the first of a three-part series, Malachy Clerkin reflects on an epic summer ahead of Sunday’s All-Ireland SFC final 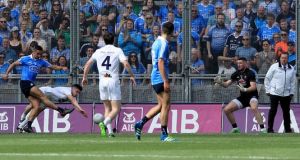 It had been a frustrating championship pretty much all the way through for McManus but occasionally he was able to wriggle free. This was his best score all year, a high-stepping, twirling, duck-n-move run across the Down defence and a soaring finish.

Donegal were actually leading here after the opening quarter. But then Galway outscored them 3-5 to 0-1 for the rest of the first half, starting with Heaney palming home this effort with the Donegal backline nowhere. It was to become a jarringly familiar sight.

Mayo were gone, Part Two. Having rescued the draw, Cork were the ones who kicked on in extra-time. But Mayo don’t fizzle out. This was the go-ahead score, O’Connor nailing it with the outside of his right boot from 40 metres on an angle. The place went dizzy.

Carlow’s longest summer finally ended but they gave Monaghan a huge fright. Leading with 10 to go, they were only point down in the 66th minute. Kelly finished them off, padding home at the end of a fine running move. Monaghan ran to the bus, relieved.

One of those to-and-fro humdingers that the qualifiers can throw up. Michael Murphy kept Donegal in credit throughout but it was McBrearty who came up with the fistful of dollars in the end. Injury-time, draw game, McBrearty landed a bomb from 50 metres.

The game was long over and O’Neill had already scored one goal. But none of that diminishes the delicate class of his second goal. Having stolen in behind the Down cover, he lobbed Michael Cunningham with a perfect parabola.

24 Waterford give Cork a scare

Waterford haven’t beaten Cork since 1960 and haven’t finished within double-figures since 1972. Yet here they were, level in injury-time with Cork down to 14 men. Late, late points from Paul Kerrigan and Colm O’Neill saw the Rebels home. But only just.

Supposed to be a clash of equals but Kildare’s McNally started at a tempo nobody in a Meath jersey could match. He had 1-3 from play on the board inside the opening 18 minutes. The question of who is Leinster’s second team was answered quicker than anyone envisioned.

This was a game and then it wasn’t a game. Kildare started well and even went ahead but then James McCarthy got in for one goal and Dean rock got in for another and the awesome might of the Dublin machine milled them to fine flour.

This was actually still quite a close game in the 25th minute. The floodgates were jimmied open when Harte dummy-soloed outside one tackle, jinked inside another, turned back on himself to evade a third and swung a rare right-footed score as a fourth closed in. Sublime.