Dublin can stay ahead of improving challengers Meath 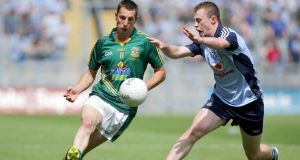 Mick O’Dowd’s painstaking stewardship of Meath’s fortunes brings the county into another Leinster final against Dublin. They are imbued with enough momentum and goodwill to raise furtive hopes within the county that a major coup can be launched against the All-Ireland champions.

Even if the projected crowd of slightly more than 50,000 is disappointing in comparison with the heyday of boom-time Ireland, it will be the biggest of the season to date.

Meath look an improved side on last year. Understrength in the semi-final they none the less launched a perfect strike on favourites Kildare, O’Dowd’s match-ups working perfectly and the team putting their opponents away in around 40 minutes.

Stephen Bray’s performance wrecked Kildare, who allowed him roam freely in plenty of space and appeared powerless to interrupt the momentum that took Meath from shading it – although they had enough goal chances to skip this phase earlier – to disappearing into the distance.

They will be improved tomorrow by the return of Mickey Newman from injury although Andrew Tormey’s dead ball deputising was reliable and ensured minimal disruption. The reconfigured defence also showed strongly with Kevin Reilly’s physical strength drawing comment afterwards.

There are however a couple of issues that give pause for thought. First, Meath can’t afford the early lapses if they create more goal chances – as they did in last year’s final and also failed to avail – and second, they can’t afford to tune out for as long as they did against Kildare, which happened at precisely the same time as Dublin normally start moving in matches.

It’s fair to Meath to allow that they were 12 points up by the time the foot came off the pedal and it would have taken superhuman forbearance not to regard the match as won but there was a slight question mark over what precisely happened when Kildare shaved seven points off the deficit.

With momentum swung in behind them, Jason Ryan’s team began to malfunction and Meath rediscovered their rhythm to finish without further fuss. Asked afterwards had his players run out of steam O’Dowd accepted that some of them had.

When it comes to keeping the pressure on, Dublin won’t prove as accommodating.

Third, although the team have improved it’s well to remember that last year Meath had a number of successes that they will be doing well to repeat. The domination at centrefield was unusual and required Denis Bastick to man the fire brigade for Dublin.

Bernard Brogan, Eoghan O’Gara and Diarmuid Connolly managed just one point from play between them, which while a tribute to Meath’s hungry defending, looks low to be relied on as an indicative return this time around.

Four, Dublin’s full backs were at sixes and sevens but they weren’t as bad again last year and the performance levels as a unit have improved in the past year.

They will however remain vulnerable to getting isolated given the pace at which Meath can attack. Damien Carroll was sensationally good at linking play for the challengers against Kildare before tiring.

For all the caveats about Dublin though the champions are capable of raising their game on last year’s display. They will need to at the back but all of the standard advantages – relentless movement, spread of scoring and power off the bench – all apply and it will be a massive surprise if a fourth successive Leinster isn’t on its way to Parnell Park tomorrow.