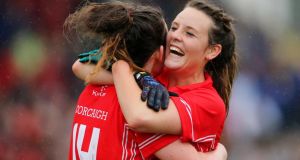 Eamonn Ryan’s Cork produced a remarkable comeback to defeat Dublin 1-19 to 2-12 on Saturday in Birr and book their place in the semi-finals of the TG4 All-Ireland ladies senior football championship.

Goals from Lindsey Davey and Lindsey Peat had Dublin on course for victory in the second half as they led by 2-12 to 0-9 but after Sineadn Aherne popped over a point to put the Sky Blues nine points in front, they failed to score again.

Instead, All-Ireland champions Cork hit 1-10 without reply in the final 20 minutes to clinch a sensational four-point win.

Dublin, who led 1-8 to 0-7 at half-time, and who had not played a game since the Leinster final six weeks previously, ran out of steam as Cork came on strong.

Powered forward by player of the match Juliet Murphy, the beaten Munster finalists grabbed the game by the scruff of the neck. Points from top scorer Valerie Mulcahy, hard-working forward Nollaig Cleary and Murphy got the ball rolling for Cork before sub Rhona Ní Bhuachalla banged home a 44th minute goal.

Kerry edged past Mayo 2-14 to 2-23 in a gripping quarter-final clash. The Kingdom needed three late points to earn a victory against a Mayo side inspired by Cora Staunton. The ace forward scored 1-9, a tally matched by Kerry’s Louise Ní Mhuircheartaigh, in a memorable tie.

Mayo led 2-13 to 2-11 with ten minutes remaining but but late scores from player of the match Ní Mhuircheartaigh, sub Margaret Fitzgerald and Louise Galvin snatched a sensational win for the Munster champions.

1 GAA players spend just 2.5 seconds within 2m of each other during play
2 How a GAA club sprang up in east Belfast over Sunday breakfast
3 LeBron James among those to slam Drew Brees’ anthem comments
4 Connacht continue player hunt as six academy graduates promoted
5 Eoin Murchan on being the wrong player in the right place at the right time
Real news has value SUBSCRIBE