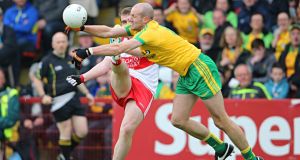 Donegal 1-11 Derry 0-11: Donegal reaffirmed their Ulster credentials with a powerful second-half display at Celtic Park against Derry which was, in places, redolent of their All-Ireland winning summer of two years ago.

The two-time Ulster champions coped with having to replace their first-choice midfield minutes before throw-in and absorbed the best of Derry’s attacking options in the first half before roaring into life with a magnificent scoring burst just after half-time.

Michael Murphy, used as an extra body at midfield in the first half, illustrated the best of his talents in that period, destroying the Derry back line from the edge of the square as Donegal conjured up 1-3 from play in a seven-minute period which seemed to silence not just Celtic Park but all of Derry city.

Murphy fired two exceptional points, including an outrageous shot from a sideline ball from just inside the 50 – a score for the ages. But if Murphy was the colossal presence on the field, Donegal’s energy came from familiar sources.

Karl Lacey, in addition to shadowing Mark Lynch, had a tremendous game and seemed to attack with impunity all afternoon. Leo McLoone swapped centre half back for centre forward and finished with 1-1. Anthony Thompson tormented Derry all afternoon.

Donegal made a last minute adjustment to their named team, withdrawing both midfielders and bringing Darach O’Connor in for a championship debut and Paddy McGrath for his first start of the season. Predictably, Derry dominated the middle sector in the opening period, with Fergal Doherty making two excellent fetches in the first quarter of the match to highlight the home team’s aerial superiority. But Doherty also suffered on a cursed day for the midfielder, retiring with an injured back after 16 minutes.

Donegal fell into a heavily defensive formation, inviting Derry to break them down. They did, several times, with Niall Holly and Emmet Bradley, both substitutes, landing terrific scores through precious little space. With Mark Lynch shadowed by Lacey and Murphy playing very deep for Donegal, the key attackers from both sides had to make do with limited possession.

Derry showed tremendous patience in the first half in trying to thoughtfully work through the Donegal fortifications but were stunned by the rapidity with which Donegal changed a 0-6 to 0-4 deficit into a 1-9 to 0-6 lead.

It was a master class in planning by Donegal, who introduced their starting midfield as they began to dominate. Those 20 blistering minutes made for ominous viewing for those who believed Donegal were all washed up.

Paddy McBrearty’s 47th-minute point could have easily have been a goal but after that, Derry slowly worked their way back into contention, reducing the gap to a single goal with six minutes left. But Donegal’s patient, hard-working drifting defence was fully operational and it was difficult to see them creating the required goal.

With the McGee brothers in full control in the full back line – Derry’s starting front line would not score over the day – and Ryan McHugh running Donegal’s counter attack – the scene was familiar.

Martin McElhinney clipped a big point to subdue any threat of a Derry rally and McLoone ended the scoring with a brilliantly worked score in the 69th minute as the visitors closed up shop and Derry, after a fine league season, contemplate another journey through the qualifiers.