Donegal look in it for the long haul after Cavan dismissal

Their unbeaten run at Ballybofey continues, which goes back eight years now to 2010 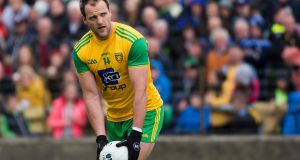 The second goal came shortly into injury time and shook Ballybofey with the sheer force of it. There is no easy way through the preliminary round of the Ulster football championship, only the unforgiving way, and Donegal certainly put on a show of that here.

It was typical Ulster football in one sense - crowded and not much room to breathe. At least in the press box it was. Out on the field it was surprisingly open and free, all but three of Donegal’s 2-20 coming from play, with plenty more goal chances to keep the thrill alive.

Cavan somehow made a game of it for the opening half hour, briefly stealing a march after Caoimhin O’Reilly gate-crashing goal, putting them 1-3 to 0-4 ahead. Only for Donegal to hit back with 1-6 without reply, then winding it up with the look of a team in this for the long haul.

In extending their unbeaten run at Mac Cumhaill Park, which goes back eight years now to 2010, Donegal also showed up some fresh ideas: captain Michael Murphy is looking as fit and influential and acrobatic as ever, finishing with 0-6 and playing a hand - or rather foot - in their first goal, punched into the net by Ryan McHugh on 23 minutes, after Murphy slightly miscued his free.

All of Donegal’s 1-10 in the first half came from play - Paddy McBrearty strangely not among those scorers, his second one-on-one goal chance brilliantly saved by Raymond Galligan on 28 minutes. Instead Ciaran Thompson and 21 year-old Michael Langan were pointing the way, with three each in that first half alone, newcomers Paul Brennan and Stephen McMenamin also fitting well into a mean defence.

No wonder manager Declan Bonnner emerged from the Donegal dressing smiling, a satisfied man with a satisfied mind. “For spells of that match yeah, I thought we were very, very good,” he said. We’ve still work to do, we know that, but kicking 2-20, you’d have to be happy.

“We’d a few lads starting for the first time, and maybe were a little tentative early on. But when we hit the 1-6, it probably was game over. Listen, there’s going to be tougher tests ahead and we know that, and we know we have to improve in certain areas. We had opportunities, no doubt about it. Maybe created four or five goal chances, we took two. On another day, in a tighter match, you’re going to have to take those chances, and that’s another area we’re going to have to work on.”

Murphy opened the second half with two frees and Leo McLoone got in on the act too, and suddenly Donegal were out of reach, 1-16 to 1-6. After having both his goal chances saved in the first half, McBrearty eventually got his first score, 25 minutes into the second half, pointing twice from play in quick succession to put Donegal seven clear again. He finished with 0-4

In the first minute of injury time, substitute Cian Mulligan showed his pace and potential with that ground-shaking goal, set up by McBrearty; Langan also had a late goal disallowed for being in the square, when finishing off a Murphy rebound.

“Cian has that pace that can do great damage,” Bonner noted. Mark McHugh also came off the bench as a reminder that he hasn’t gone away, and there are others to come back still, the likes of Odhrán Mac Niallais and Paddy McGrath. “And Michael (Murphy) yeah, he’s a real leader, no doubt about it and he’s coming into really good shape now and playing really well. He’s an important part of the whole group.”

Cavan started without their key man Dara McVeety, still coming back from a hamstring injury, his impact in the last 20 minutes not sufficient to close the gap, although Gearoid McKeirnan was excellent, doing his best to keep some hope alive, even as their wide count mounted.

“But we’d be disappointed that after we got the goal, we seemed to step back, and Donegal seemed to step up, with 1-3 or 1-4 within 10 minutes, a huge turning point. It goes back to that situation, we’ve got to put 35 minutes together in each half, and that’s part of our learning curve. And to concede two frees immediately after half time. At this level, we need to come out in the second half with a big 10 minutes. That didn’t happen, but that’s part of the learning curve.

“But we’re still in an All-Ireland championship, we’re not finished, I hope, at this stage. I felt last year when we hit the back door our performance dropped maybe five, 10 per cent. Are we giving up on the rest of this year? Or will we dig in, go harder, and see where the draw will take us? Let’s keep this season going as long as we can.”

It sends Donegal through to play Derry on Sunday week, with Monaghan and Tyrone tucked away on the other side of the draw, opening a clear path towards another Ulster final, Donegal having contested six of the last seven.