Darragh Ó Sé: Holding back against Dublin is a luxury Tyrone cannot afford 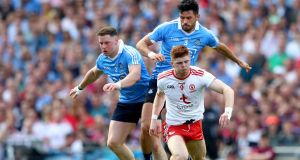 When you’re around long enough, you get to hear everything eventually. I thought I was long past being surprised by anything in football. But then I heard Peter Canavan saying he reckoned Tyrone should be trying to keep a bit up their sleeve when they play Dublin on Sunday. And do you know what’s worse? I think he might even believe it!

I had to laugh for a second when I heard it. Can you imagine the reaction if I said that about Kerry if they were in Tyrone’s position? It would be all ‘cute-hoor’ this and ‘yerra’ that. Would anybody take it seriously? Not for a second.

7 ‘An inspiration’: Young poet Amanda Gorman and her words capture the moment at Biden inauguration

12 ‘The hellhole says goodbye’: Glee and relief in Europe as Trump departs

13 ‘Brexodus’ of jobs from City of London to continue, says EU commissioner

15 Kamala Harris is about to make history. So is her ‘big, blended’ family

26 What is Ireland’s plan for vaccinating people against Covid-19?

29 Coombe begins investigation into vaccination of family members of staff

34 Gordon D’Arcy: Time for IRFU to be bold and secure futures of prized assets

37 Gorgeous terrace turnaround is right on track for €445k