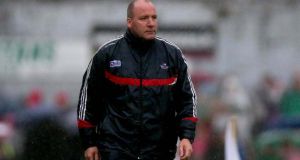 Cork GAA could be facing a fine in the wake of Monday’s statement by the county executive, which in the course of thanking former manager Brian Cuthbert for his two years in charge, blames referee Pádraig Hughes for the county footballers’ disappointing season.

This refers to the contentious award of a 52nd-minute penalty to Kerry in the drawn Munster final in Killarney last month. The statement says that but for this decision Cork would “probably” be in an All-Ireland semi-final. In the end the match was drawn.

Having lost the replay Cork slumped to an unexpected exit from the qualifiers against Kildare a week later – scheduling is also suggested as a reason for the defeat.

A Croke Park source has told The Irish Times that whereas the matter couldn’t be dealt with on Monday because of the bank holiday it “will be considered as soon as possible this week”.

Under Rule 7.2 (e) – Misconduct considered to have discredited the association – members, teams and units are all liable to be disciplined by a range of punishments from suspension to paying fines.

Although the match regulations prescribe the option of sideline bans for managers who criticise referees after matches there is still scope for the matter to be dealt with under the above rule, which used to be the only way of punishing such infractions.

Former Tipperary football manager Peter Creedon and Meath’s Mick O’Dowd were for instance dealt with under the new regulation. However the option of using Rule 7.2 (e) remains and is obviously the more appropriate measure for dealing with a county executive.

The statement, issued on Monday lunchtime, includes the following: “The executive of Cork County Board would like to express its sincere thanks to Brian Cuthbert for his two years at the helm of the Cork senior football team.

“Brian made great strides with a largely new-look team playing excellent football, and steered them through two successful Allianz League campaigns which saw them top the league in both years, reaching the semi-final in 2014 and the final in 2015. The 2015 campaign was particularly arduous given that it involved an unprecedented four trips to play Ulster teams away.

Meanwhile, John Cleary, considered the front-runner to succeed Cuthbert, will decide this week whether or not to allow his name to be considered. The twice All-Ireland winner and manager of the All-Ireland winning under-21s in 2007 was interested in succeeding Conor Counihan in 2013 when the job went to Cuthbert.

“My name is out there,” he said, “but I haven’t even thought about it and that’s being quite truthful. When it broke, I was on holidays. I’ll see will I let my name go forward – it’s a huge, huge job and I’ll sit down in the next couple of days when I get a bit of time.

“It’s not that you just take it and that you’re manager and everything else falls into place. It’s like having a second employment with no pay. It’s not something that you jump lightly into.

“Look, we’ll see what happens during the week.”