Cork flash with old menace and new intent against Dublin

Allianz League victory for the Rebels against experimental Leinster champions 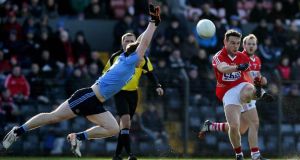 After last year’s nightmares, Cork flashed with old menace and new intent on Sunday afternoon. An entertaining and end-to-end encounter was settled when Conor Dorman came raiding from the back division to fire a 70th minute point which leaves Dublin waiting for another year for their first win in Rebel county since the 1990 league season.

In keeping with recent Allianz league meetings between these counties, this match was open and played at a furious pace which neither side were inclined to let slip. Cork had the courage to press up on the Dublin half-back line in the second half and slowed the supply of ball into the visitor’s inside line.

Paul Kerrigan’s introduction gave Cork the pace and penetration to unlock Dublin in the closing ten minutes, with Eoin Cadogan, after an impressive game at full back, bursting forward to give Cork a 1-14 to 0-16 lead. A brilliant reply by Michael Deegan left the vocal visiting support with plenty to shout for but Cork, superbly organised in the last quarter, held out.

Cork’s first goal originated in a mishit shot from Goold which travelled like a bullet to Colm O’Neill on the edge of the square. His swift transfer to John O’Rourke brought about a blocked shot which Jamie O’Sullivan managed to scramble over the line.

The goal offered Cork a perfect instruction of what could happen when they moved the ball fast at pace into O’Neill and Hurley, both of whom were pictures in frustration in that first half. O’Neill was given his first chance to shine in the 27th minute and promptly curled a point which reminded the public of his limitless potential at corner forward.

He chased down the next ball sent into his patch and won a free, which he dispatched from the ground. But for long periods of that half, both of Cork’s front men were spectators and the home team were content to shoot from distance, with John O’Rourke and Goold landing exceptional strikes.

Cork led by 1-07 to 0-9 at the break, which must have caused mild bafflement amongst the Dublin statisticians as they broke down the game. For most of the half, they ran the show to suit their tempo, breaking from pace and recycling the ball just outside the Cork 50 and seeking to free Kevin McManamon, Eogahn O’Gara and Dean Rock with precise passes.

Eoin Culligan, a chip off the Philly McMahon block in stature and attacking-nature, roamed upfield with impunity and Thomas Brady won ball after ball from the visitors, who responded to the Cork goal by rattling off four points with apparent ease.

They pressured the Cork kick out and might have nicked a goal after Brady pressed hard and forced a quick pass which Rock picked off to draw a decent save from Ken O’Halloran with a low, right footed shot.

In the 44th minute, they should have profited after more good work from Brady, closing down the Cork kick out, set O’Gara free: his lobbed handpass to Costello was cut out by O’Halloran and Cork survived.

How to get to the Champions Cup final without breaking the bank 05:00
Women to the fore as Sports Ireland announce Olympic grants 01:00
Call for hunters chase to be included in Dublin Racing Festival 01:00
Patrick Mullins confident Leopardstown ground will be ‘spot on’ for Festival 01:00
Callanan aiming to set fresh records with Tipperary 00:30
Crossword Get access to over 6,000 interactive crosswords