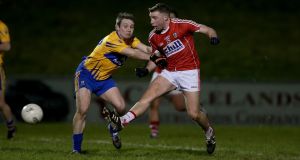 Brian Hurley scores a goal for Cork in their McGrath Cup victory over Waterford in Mallow. Photograph: Donall Farmer/Inpho

Cork clinched their eighth McGrath Cup with an expected win over Clare in a competitive final in Mallow on Friday night.

Backed by the wind from the start Cork did the bulk of the damage in the closing 15 minutes of the opening half, outscoring their opponents by 0-7 to 0-1 to lead by 1-10 to 1-4 at the interval.

Brian Hurley grabbed their goal after 14 minutes from a Dan MacEoin pass, but Clare cancelled it out with super effort following a flowing five-man move within a couple of minutes as Eoin Cleary punched home from close range.

Cork could have had a couple more goals, Clare goalkeeper Joe Hayes getting his finger tips to a Mark Collins shot and then MacEoin hitting the post with only Hayes to beat.

Clare managed to cut the gap to four points after 53 minutes and Cork were grateful for goalkeeper Ken O’Halloran denying Cleary, when straight through moments later.

Corner back Colm O’Driscoll scored 0-3, profiting from the plan of following his marker Seanie Malone, who acted as the Banner sweeper.