Clinical Kerry make it three wins in a row in Castlebar 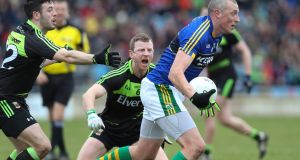 Kieran Donaghy of Kerry gets away from Cathal Carolan and Colm Boyle in Castlebar. Photograph: Andrew Paton/Inpho

With the Allianz Football League about to go into the algorithm phase, it at least became clearer for the two counties in Castlebar at which end of the table their calculations will be based.

Kerry’s third win in a row elevates them into semi-final contention whereas Mayo’s four-match winning sequence against the visitors came to an end and they face an anxious two-match finale against Roscommon and Down.

It was a scrappy match, high on the foul count and low on aesthetics, with two red cards for Kieran Donaghy and Diarmuid O’Connor, both of which were for double yellow cards.

Although Kerry were slow to get into the contest they eventually took a grip on the scoreboard with two goals either side of half-time and then were in a position to dictate the terms of engagement with tight defence to suffocate Mayo’s attempts at recovery and quick-breaking counter attacks to set continually updated scoring targets.

The first half held out some promise for Mayo, as Aidan O’Shea directed traffic and could have had a goal in the 28th minute but somehow managed to lift the ball over the empty goal when trying to wrestle his way through the Kerry defence.

Had the home side held a 0-7 to 0-3 lead going in at the break they would have had something to show for playing with the breeze but the match effectively turned on the last score of the half.

Darran O’Sullivan, who had an excellent match, managed to procure, protect and process the ball from a ruck in the Mayo defence, which was opened up for Johnny Buckley to drive home the ball and make it a one-point contest, 1-3 to 0-7.

Kerry stepped it up on the resumption and with O’Sullivan - who performed the parallel service of keeping Lee Keegan tied up at corner back throughout - posing danger all over the attack and Colm Cooper hitting his stride on a first league start in three years Mayo’s defence which had been quite effective in the first half began to feel the stretch.

Whatever chance the home side had of recovering the initiative evaporated in the 48th minute when Rob Hennelly under pressure from Kieran Donaghy didn’t deal with a dropping ball and Donnchadh Walsh fisted it into the net.

Mayo simply hadn’t been getting scores with the sort of fluidity necessary to get back into the match and that didn’t change. Poor and panicky shot selection led to 13 wides and five shots dropped short. Goal chances - O’Shea and also Jason Doherty, well blocked by Mark Griffin and goalkeeper Brendan Kealy, who had to be treated for a blood injury - not cashed in during the first half came back to haunt them.

Kerry had good displays in a number of areas in the second half. Bryan Sheehan came more into the match at centrefield and if Peter Crowley picked up a black card on the hour he had played well until then on Aidan O’Shea.

Replacement Brendan O’Sullivan had another effective display coming into the match, driving forward and kicking two points on the break.

“Satisfying second half, I think,” was Kerry manager Eamonn Fitzmaurice’s summary. “The goal we got before half-time kept us in it. Mayo were threatening to go away from us. We were inaccurate in possession. We worked very hard when we didn’t have the ball but we weren’t accurate enough when we had the ball and that kept us in it. In fairness the second half was a good bit better.”

Mayo counterpart Stephen Rochford was left to regret not bringing in a bigger harvest when they had the weather.

“For 35 minutes of that game we were dictating a lot of it but simple mistakes, individual mistakes if you want to call them that, came back to bite us and our lack of solid conversion just left us in a position where we were really fighting a tide in Kerry.”