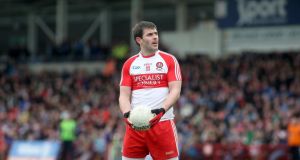 Mark Lynch: “Aye, well, we have been involved in a lot of games where we have played open attacking football and we have been praised for it. But we ended up getting beat. So you do have to weigh the options up.” Photograph: Lorcan Doherty/Inpho/Presseye

Seventeen seasons after they last won the Anglo-Celt cup, Derry’s football team is the most puzzling of the Ulster jewels. Year after year they have produced enough shimmering football – and footballers – to lend substance to the argument that they are primed to make a run.

Derry have made occasional progress in the qualifiers (an All-Ireland semi-final appearance in 2001, a three-point defeat to Dublin in the quarter final six years later), but their record in Ulster has been patchy. Tomorrow they host a Down team buzzing after promotion to division one. Derry are one of the teams vacating the top tier, just a year after featuring in the league final.

Derry’s last championship action was a thrilling match against Longford – which Derry lost. Longford itself is in the doldrums after last Sunday’s unhappy outing against Dublin.

Derry provoked the first great controversy of the season after a Saturday night league game when they decided to prevent Dublin from amassing a big score by going all-out defensive. It was March; the wind was howling, and it was rainy (much like May and early June, in fact).

Derry were desperate to hang on to their division one card. But they finished with four points and held the Dubs to 0-8: it was enough to spark a general debate on the health of the game, which degenerated into a bit of a circus.

“Circus is right,” says Brian McIver, the Derry manager. “I paid very little attention to that. In fact, as a team it probably did us some good. Anyone who looks at that game: nobody has asked why we went across the field with the ball and retaining possession. It was because Dublin had learned their lesson from the Donegal game and set up, by and large, the same as ourselves.

“That is not a criticism of Dublin,” McIver adds. “They will be a more difficult side because of that. But by the same token, we learned our lessons from last year’s league final. We went out to ensure that we would be in that game in the last 10 minutes. So the criticism did nothing but reinforce our belief that we play as we want.”

That match might not reflect how Derry set up against Down tomorrow: in keeping with the Derry form, nobody knows.

Came not to contain Dublin

“No. We tried to beat them,” Lynch says. “But we understood that in order to do that you had to curtail them. And it is very hard to beat Dublin, very hard. We had to curtail their attacking play. But Dublin sort of saw that too because at the start of that game they set themselves up much the same as we did, so we had to try and attack them. And we did have chances.”

Lynch has endured considerable disappointments since his breakout year in 2004. He is emblematic of the talent that Derry not been able to fully harness: an Ulster and All-Ireland medal winner in 2002 and a key player on the county U-21 sides, which lost the Ulster finals of 2004 and 2006. His senior honours have been confined to Derry’s league title won in 2008.

Like everyone involved with the squad, Lynch has studied the contemporary landscape and is more than happy to play the percentages. The criticism after the Dublin match just deepened their resolve.

“Aye, well, we have been involved in a lot of games where we have played open attacking football and we have been praised for it,” he says. “But we ended up getting beat. So you do have to weigh the options up. It does depend on who you are playing. Sometimes you need to be defensive. It is about how Brian sees it. That is what we are happy to do.

“You try not to think about it – just as when you are getting plaudits you try and ignore those as well. You keep your head down and try and work on things. We were playing a Dublin team with an awesome attacking talent. We had to try and set ourselves up to compete. But we also had a lot of chances in that game. If we had taken those, then we could have been six or seven points up. But that wasn’t to be.

“And some people view it differently to other people,” he adds. “They have a right to their opinion, so we just have to take it on the chin and move on.”

“The toughest to play is probably the defensive system, if you are not used to it,” Lynch says. “What it takes is a serious focus and mental approach to your game. To play that way, you need to be in the right position all the time.

“Sometimes in an open, attacking game you can say to yourself that you will wait for the next kick out and go for it. You can’t do that within a defensive system, so it is tougher in that regard. If you do something that you are maybe not renowned [for] or something that is not seen as your strength, then yeah, it is very satisfying. And we worked on that against Dublin. It did work to a certain degree. There were improvements. We still needed to score.

“But, for sure, you do take some satisfaction from holding such a good team to a low score.”

The bottom line for Derry is that they lost. In order to salvage this season, they need a result against Down, and then they need to establish a pattern of consistency.

A year ago, Derry had high hopes of taking Donegal out when they hosted them in Celtic Park. The first half was cagey and Derry stayed with their visitors. They had every reason for optimism. But they were torn apart in an eight-minute blitz just after half time. Donegal reclaimed the Ulster title and went on to the All-Ireland final; Derry crashed out against Longford.

“We bottomed out,” Lynch says flatly. “It was a bad, bad summer.”

“We got heavily criticised for not kicking the long ball in against them,” McIver recalls. “We tried to run it. Monaghan learned from us and, when they played Donegal, they drove every ball in long and it came straight out at them. So then they were criticised for not running. Hindsight in football is a wonderful thing.”

After that controversial Dublin game, McIver acknowledged that the heavily strategic new game is not his preferred option and that he prefers the ideal of two teams just attacking.

“But you can’t bury your head in the sand,” he says. “As we saw it, we took the whole brunt of the criticism and we looked at it and decided that we would suit ourselves. It does no harm. We would have accepted it if we felt it was deserved, but on that night we felt it was totally undeserved.”

Above all teams in Ulster, the thought of Down and Derry mingling brings to mind all-out, flamboyant attack. But the Oak Leaf county’s need for something to shout about in summer means substance must take precedence over style. And if that means containing their visitors, so be it.

“Down are full of good footballers,” McIver says. “We remember only too well that two years ago we were five points up on Down and they hit us with two goals in five minutes. So hopefully, lessons learned.”