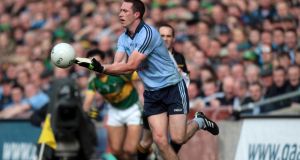 When Dublin last met Kerry in an All-Ireland final four years ago Barry Cahill was playing. One of a half-forward line, with Paul Flynn and then captain Bryan Cullen, which worked itself to a standstill on the day, he now works as the GAA’s Business Development Manager in Croke Park but is keenly interested in whether his old team-mates can repeat the success of 2011 against the current champions.

He’s looking forward to how the match-ups materialise and maintains that there isn’t much between the best 20 players on either panel.

One position in which he has a personal interest is that involving his club-mate from St Brigid’s Paddy Andrews, whose recent feats of marksmanship have included five points from play in the semi-final replay win over Mayo.

Four years ago, he didn’t feature on the All-Ireland winning panel and only in the past couple of seasons has his talent for finishing, a familiar sight on the Dublin club scene, blossomed at the top level.

“I’m delighted for Paddy,” says Cahill, “because I have seen him do it on and off at different stages. And for him to do it in such a big game I was delighted for him. He’s had a difficult career with Dublin he hasn’t always been a starter and been in and out of the team. He missed out on 2011 but I always feel Dublin are better with him in it.

“He gets on a lot of ball. What impressed me the last day was how clinical he was. He didn’t take too much out of the ball as soon as he got it he looked and take a score. He did a bit of damage on Keith Higgins which doesn’t happen too often.

“2011 was very tough for him when he got dropped and we went on to win the All-Ireland. When Jim Gavin was appointed he was delighted because he would have worked with Jim at under-21s and would have felt that Jim was a believer in Paddy as a footballer. He’s kicked 10 points from play in the last three games, which is serious going so I think maybe Éamonn Fitzmaurice will probably have to do a bit more homework on him.”

Andrews had a strange introduction to the top level and in 2009, during Pat Gilroy’s first year in management, he started matches at both ends of the field. Having played corner back in the Leinster final against Kildare, he retained the position for the catastrophic All-Ireland quarter-final against Kerry.

“He played well on Alan Smith, ” recalls Cahill, “but a month later we obviously had the collapse against Kerry. Paddy was on Colm Cooper that day and didn’t have the best of days.

“That was probably the end of his defensive days.”

Viewing the match from a tactical perspective, he expects Kerry will come up with a surprise in the final. A year ago Éamonn Fitzmaurice configured the team defensively for the final against blanket-defence experts Donegal and won, albeit in a less than free-flowing spectacle.

“I expect something different from Éamonn Fitzmaurice. He’s shown that in the last couple of years, coming up with something out of left field and certainly, last year, for all the attacking quality that they had, they were happy to go with that defensive option for the final. So it was a case of horses for courses.

“Kerry were a bit porous through the middle the last day against Tyrone, coughing up five goal chances and Tyrone got a lot of headway running at them. I expect Peter Crowley to play centre-back and hold the middle. And to try and give the full-back line a bit more cover.”