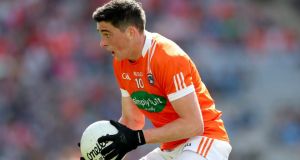 Armagh gave a hint that they could yet prove a formidable force in Division Three by the efficient manner in which they put away Sligo at the Athletic Grounds yesterday.

Kieran McGeeney’s side lost no time in getting into their stride and led by 0-10 to 0-2 at half-time by which stage their visitors still had not scored from play.

And when Andrew Murnin and Ethan Rafferty found the Sligo net after the break, Armagh’s dominance became even more pronounced.

Stephen Coen and Adrian Marren snapped up all of Sligo’s scores between them. In contrast, Armagh had a generous spread of marksmen in their ranks, with the impressive Rafferty pocketing 1-3 and the accurate Rory Grugan converting five frees in a six-point haul.

Armagh manager Kieran McGeeney lost no time in sounding a warning to his side, though, despite their impressive victory.

“I believe that Division Three will be fiercely competitive and we will have to be on our toes. There will be an edge to the Ulster rivalry with Fermanagh and Derry in there, as well as ourselves,” he said.