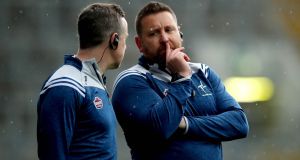 Kildare manager Cian O’Neill branded one, possibly two national media houses “sly and devious” in the aftermath of this 15 point defeat to Dublin.

Clue: each masthead includes “The Irish.”

Some context. O’Neill was quoted in the build up to this Leinster football semi-final as stating “We are going to win that match.”

When immediately offered the chance to clarify such a clear statement he added: “You have to go into every match believing you can win. It doesn’t matter who it is. The nature of the game of football is that in any one day if you perform to your best you are in with a shot.”

Kildare defended to their best for long stretches but Ben McCormack spurned two goal chances that could have altered the complexion of this eventually lob sided contest in front of 36,126 Croke Park customers.

But back to the core of O’Neill’s post match ire.

“[WHAT I SAID] was portrayed totally differently,” O’Neill stated.

“It’s moving away from the game here, but I was very disappointed with that. I hear often, time and time again, how the media struggle for access to managers and players. I think that is a perfect example why that access has been withdrawn and pulled back over the years.

“The question was,” O’Neill continued to explain what he said after Kildare beat Longford. “’Now you have progressed to next week, are you going to Croke Park to take the defeat and then get ready for the qualifiers or are you going to try and win the match?’ And I said: we are going to beat Dublin, we are going up to beat Dublin, we are not going with any kind of inferiority complex.

In fact, journalists from both The Irish Times and The Irish Independent referenced the question and the rest of O’Neill’s answer in their articles.

Still, he added: “It was sly. It was devious. I suppose there was an element of instant gratification in it to try and get a headline. I am sure it did. What do you? I try to be honest when I answer questions.”

The Irish Times headline? “Cian O’Neill unflinching in his optimism about Kildare football.”

Hardly damning stuff, as O’Neill conceded in his very next breath.

“But it didn’t affect our preparations. Probably gave people plenty to talk about during the week. I suppose swings and round abouts. You’ll have less people talking to ye - ‘Ye’ being a generic point there before I get rattled on that one as well - if that keeps on happening.”

O’Neill was unavailable for instant clarification. In fact, he was busy doing more media.