All you need to know about the fourth round qualifier draw 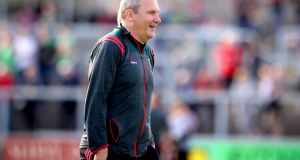 James Horan’s Mayo team are one game away from the Super 8s. Photograph: Ryan Byrne/Inpho

The eight teams eyeing the last four places in the Super 8s will discover their fourth round qualifier opponents on Monday morning.

The draw for the final round of the All-Ireland football qualifiers will be broadcast live on Morning Ireland on RTÉ Radio 1 just after 8.30am and on RTÉ News Now.

The four winners from Saturday’s round three matches will be in one pot, with the four defeated provincial finalists in the other.

So that’s last year’s All-Ireland finalists Tyrone, who eased past Kildare in Newbridge on Saturday, Mayo (the finalists of 2012, 2013, 2016 and 2017) who edged Armagh in Castlebar, Clare who beat Westmeath and have only ever made one All-Ireland quarter-final appearance, and Laois who beat Offaly by five points.

The beaten provincial finalists are Galway who lost to Roscommon in the Connacht decider, Meath who only scored four points against Dublin in the Leinster final, Cavan scored 2-16 against Donegal in the Ulster final but still lost by five points, and Cork who put in a heartening display in their Munster defeat against Kerry.

Meath and Laois can’t play each other again at this point, as reverse fixtures are prevented in round four of the qualifiers and they have already met in the Leinster semi-final. So Galway, Cavan and Cork have a 50:50 chance of avoiding one of Tyrone or Mayo. While Meath have a one in three chance of avoiding the two big guns in the draw.

All matches will have a winner on the day, meaning penalties will be needed if necessary. The CCCC will confirm the four neutral match venues and times on Monday afternoon and the fixtures will be scheduled for the weekend of July 6/7th.