Mayo show all their resilience to keep gallant Armagh at bay 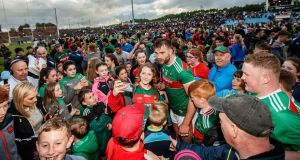 Bhummmphhtttt... Pardon the cheap sound effects, that uneasy sound of Mayo crash landing over the line in Castlebar on Saturday evening still being heard inside and outside the dressing room afterwards.

Better of course than landing just short. Armagh will be hearing that sound for the rest the year, they were every bit as close as the one-point margin suggests, and while Mayo have landed themselves into the fourth round draw it has left manager James Horan counting some further losses.

Lee Keegan joined their lengthy injury list after limping off just before half-time, clearly in significant discomfort after rolling on his left ankle, forcing Mayo into usual hyper-drama mode, relying on instinct and experience.

After losing Diarmuid O’Connor during the week to a wrist injury, Mattie Ruane’s season already over and Séamus O’Shea still missing, Jason Doherty also retired with what also appeared to be an ankle injury.

One positive against that was the first appearance all year of Cillian O’Connor, who kicked two late frees to keep Mayo in front. But Horan took issue with the a certain line of questioning which suggested Mayo’s injury list has something to do with their training methods (reportedly made during a local podcast).

“If you’re reporting stuff, surely you do a bit of research,” said Horan. “Come to training. We haven’t stopped anybody coming to training. People are commentating on stuff and it is absolutely ridiculous.

“We play a games-based approach to our training sessions. There are 30 people on the field... some of the commentary which has been reported back to me, we have a good laugh at it. If people are making comments then try and get some details or try and get some evidence.”

With just the week to prepare for their next game, the latest injuries will stretch Mayo’s panel yet further. With 10 minutes of normal time remaining, Mayo, helped by four points from the outstanding Darren Coen, were still up 2-11 to 1-9, only to be outscored six points to two in the time that remained.

Armagh’s squandered a few late changes to go back in front – Jamie Clarke forcing a close-up save from David Clarke, Rory Grugan’s point fired just over the crossbar – which might just have easily gone under.

“We should have closed it out a bit better,” added Horan, “but we had to dig hard in the last couple of minutes, we did that very well. Our full back line and Colm Boyle in particular was under pressure but showed very well for kick-outs and they give us the platform to finish out the game. I thought we fought it back well, stemmed the tide and ran out deserving winners in the end. Delighted with the win, we’re in the pot on Monday.

Armagh manager Kieran McGeeney was left counting on a different front, what he considered to be a shortage of injury time. Four added minutes were announced, and while referee Maurice Deegan actually played five, the last shot at goal was Armagh searching for extra-time, only Niall Grimley’s effort drifted just wide.

“There were at least 10 head injuries in that second half and nobody was taken off,” said McGeeney. “It’s very hard to take. We have played in games this year with six or seven minutes added with no head injuries.

“There were more stoppages in that game. But listen, you can’t take away from Mayo. Jamie was unlucky with the goal, and so was Rory. We had the chances, didn’t take them.”

After five seasons with Armagh, the 2002 All-Ireland winning captain was also left counting up some reasons why he might not stay for a sixth season.

“I’d say there are 101 reasons,” said McGeeney, clearly in some jest.

“We have improved, but we probably don’t have the same dark arts experience that other teams have and it just costs us at the end of games. It’s probably a wee bit early yet, I couldn’t be any prouder of the players. It’s a pity they didn’t get any more out of it, they deserved a wee bit more from that that, but that’s the way it goes.”

Mayo won this game on two fronts, coming first on the bounce and then surviving the Armagh rebound. The modern Prometheus of Gaelic football, backed by their unwavering support in the super crowd of 18,711, could never completely shake off Armagh, replacement Kevin McLoughlin’s goal on 53 minutes, deftly set up by Colm Boyle, eventually giving them just enough breathing space to survive.

Only Armagh never once surrendered, hitting the last two points in the crazy ending, a free from Rian O’Neill and a point by Stefan Campbell, four earlier points without reply testing Mayo’s enduring limits. McLoughlin’s goal was decisive: he finished with 1-1, and Donie Vaughan also made his old presence felt coming off the bench.

Still not quite vintage Mayo. Andy Moran was replaced just before half time, O’Connor’s introduction in the 48th minute giving them some of the composure they needed in front of goal. They’d little else to go on in the end, Jamie Clarke, in contrast, lively until the death for Armagh, finishing with 0-5.

Mayo had been sent crashing at this same juncture last summer, caught in the crossfire hurricane of Newbridge or nowhere, and Armagh matched them for pace and physicality, in a game low in slack and high in calories.

During the first half the teams were inseparable. Jarlath Óg Burns stood up against Aidan O’Shea and matched him every step of the way. Rory Grugan sliced the posts on their first attack, then on six minutes, Aidan Nugent slipped the ball clean through to O’Neill, the man who came to Castlebar with 2-19 to his name already, from four games, the rising Crossmaglen star palming into the net and Armagh were up 1-1 to 0-1.

Two minutes after that Mayo had their first goal, Moran setting up the loose and lively Fionn McDonagh. Doherty was going well until injured, Mikey Murray more subdued on his debut, only if Mayo are to make the Super-8s they’ll likely be crashing landing again. Bhummmphhtttt...