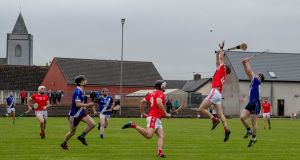 The GAA has issued a range of guidelines to prepare for the imminent return to competitive club action over the next week, including the recommendation that spectators download the HSE tracing app and that those over the age of 13 wear face coverings as well as limiting the numbers allowed to enter the pitch enclosure during matches.

The Central Competitions Control Committee finalised the protocols for players and officials and sent them to the counties on Friday. They will govern the return to play in competitive fixtures up and down the country from next weekend.

They provide for the safe deployment of teams within the pitch area, including placing panels of 24 players on either side of the ground, ruling out handshakes and curtailing the numbers in a backroom team to five for football and seven for hurling, to include two hurley carriers.

There will be no water carriers but a water break will be taken between the 15th and 20th minutes of each half at the discretion of the referee when the ball has gone dead. Players are expected to bring their own ‘clearly marked water bottles’.

Referees are empowered to send anyone not observing these procedures outside of the playing enclosure and there is the special Covid-related offence: “Deliberately coughing in the face of an opponent may be considered ‘behaving in a way which is dangerous to an opponent’ (5.17 H; 5.19 F) – Red Card; Category III; one-match ban.”

Then later on Friday, the National Health and Safety Committee issued advice for spectators.

Attendances of just 200 will be permitted on the weekend of the 17th and will have to include the teams, volunteers, officials and any media but that figure rises to 500 from the following week in keeping with phase four of the Government’s revised roadmap on the relaxation of lockdown schedules.

There is no entry to the field even for presentations and tickets must be bought in advance.

There was some good news from Ulster with news that matches can now go ahead. Previously the limit of 30 people at an event ruled out football and hurling fixtures, which mean that teams from the province had to seek challenge matches south of the border. That has now been revised but there will be no spectators present in the immediate term.

A statement from the province’s chief executive Brian McAvoy set out the new position.

“Following today’s executive meeting, I am pleased to announce that outdoor competitive games in the ‘Six Counties’ will now be able to take place.

“This means that clubs will, from Saturday, July 11th be able to play challenge games in the north, ahead of the GAA’s resumption of competitive club fixtures on Friday, July 17th.

“However, counties and clubs should be aware that spectators are not yet permitted to attend games in the north – those attending games is limited to essential personnel only [eg players, team management personnel, medics, Covid supervisors, match officials, working media (where appropriate) and club officials who have a specific function at the game].

“There is an onus on clubs and counties to enforce the no-spectators regulation rigidly. Hopefully within a very short space of time there will be provision for some spectators to attend games but until such times games can take place with only essential personnel being present.”

The GAA’s Covid-19 Advisory Group has revised its advice on dealing with a positive test but the text has not yet been finalised. Further news is expected in the coming days.

Meanwhile, there was some relief in Cork concerning the potential Covid 19 outbreak in the Carbery division. On Friday Oliver Plunketts joined Argideen Rangers and Ballinascarthy in suspending activity pending news on Covid tests taken by a number of players in the area after a social contact had tested positive.

But news emerged that the three players who had been close contacts had tested negative and whereas a couple of other results had yet to come back, of the approximately 10 tested there had been no positives among the casual contacts either.

The close contacts will continue to self-isolate in accordance with HSE protocols but major disruption appears to have been averted.