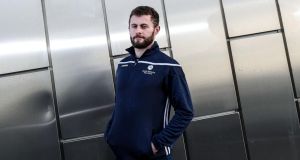 Dublin footballer Jack McCaffrey: “It’s just completely individual ... If you tie yourself to [a date], you’re setting yourself up for a fall. You just have to move at your own pace through it.” Photograph by Dan Sheridan/Inpho

Jack McCaffrey and Liam Connerton are perhaps unlikely friends but university and, more recently, a shared injury journey has bound them together tightly.

McCaffrey, of course, is the All-Star Dublin footballer while Connerton is the Longford forward whose goal killed off the Dubs in a surprise O’Byrne Cup semi-final win two years ago.

The pair went to college together at UCD and, last September, ruptured their cruciate knee ligaments within days of each other.

McCaffrey did his a few minutes into Dublin’s All-Ireland final win over Mayo while Connerton, son of Longford manager Denis, suffered his in a club game.

They met up in Santry last November and exchanged horror stories before going under the knife for corrective surgery on the very same day.

The funny thing is, there’s been little back and forth since about their respective recoveries.

“It’s just completely individual,” said McCaffrey, who is studying Medicine. “I don’t want to know what stage he is at! And I don’t care! If you tie yourself to something like that, you’re setting yourself up for a fall. You just have to move at your own pace through it.”

It’s why McCaffrey is loathe, publicly at least, to announce any return date with Dublin.

He definitely won’t feature in the Allianz league though some Championship game time as they chase four All-Irelands in a row seems a realistic goal.

“At some stage, I’d hope so,” he said. “You are looking at, from All-Ireland final to All-Ireland final, 12 months, and most people I have spoken to who have got back did it under that but, again, I’m not going to pull a date or a game out of the air because I just think you are setting yourself up for a fall, which I don’t want to do.

“Players like Ciarán Kilkenny and Eoghan O’Gara in our team have first hand experience of the injury and a club mate of mine did it too. It’s incredibly individual. I remember when Ciarán did his [in 2014], Kevin O’Brien was corner-back at the time and he did his as well, literally a week or two in the difference. When you compare them coming back there was an astronomical difference.”

O’Brien never returned to those heights while Kilkenny has flourished since his return, developing into one of Dublin’s most important players.

Others have returned from the serious injury to play their best football too, reigning Player of the Year Andy Moran of Mayo being the best example.

McCaffrey, still just 24, believes that he too can come back a stronger player.

“Yeah, definitely,” he enthused, speaking yesterday as Denis Mahony Motor Group renewed its support of him and Dublin Ladies footballer Noelle Healy. “I’ve probably needed a window of fitness work for years. You just don’t really get it sometimes, between all of the teams you are trying to play with.

“I could probably do with catching up with lads in the gym a bit as well, so there are definitely some positives.

“The one main negative about the whole thing is that it happened in the third minute of the match. If it had happened in the 67th then, to be honest, this would not be the worst thing in the world at all. And it isn’t.

“I’m confident that I’m getting great guidance from our physio and our strength and conditioning staff as to what exercises to do.

“If I come back 100 per cent, having completed a good block of work, you can trade off these blocks of fitness for four or five years nearly.”

The Clontarf man was Footballer of the Year in 2015, when he won his second All-Ireland medal, though hopes to return to the fitness levels of three years earlier, when he first joined the senior panel.

“I was probably playing the best football of my life in 2012,” he said. You could just run all day whereas more recently, you maybe make six runs – and I’m just pulling that number out of nowhere – in a half. I don’t know if that number is right or wrong but there was a time when I could be marking a man and I’d just go, next play, go, and go. And recently, or relatively recently, you’d be like, ‘Okay, I made a run there, I’ll sit back and mark my man and go again [in a while]’.

“Probably a bit of that is just maturity and acknowledging that you need to be fit to do your defensive duties and not just be running around like a headless chicken.

“But I’d love to be able to go out on the pitch and know that I can run up and down for the next 70 minutes, non-stop. That’s probably not an achievable goal but there’s always room for improvement there and it’s something I’d like to go after.”