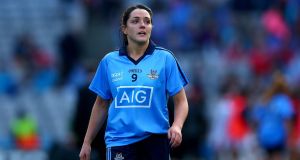 Sinead Goldrick scored the only goal of the first half for Dublin against Westmeath. Photograph: Inpho

The Dublin side demolished Westmeath by 26 points in a surprisingly one-sided provincial decider at O’Moore Park in Portlaoise.

Dublin ran out 4-23 to 0-7 winners against the Lake County, to repeat last year’s final success against the same opposition.

There was little to suggest that such a wide gulf would separate the counties at the finish as Dublin led by nine points at the break - 1-11 to 0-5.

In a wind-swept encounter, Sinead Goldrick scored the only goal of the first half for Dublin as Leona Archibold kept Westmeath in touch from frees.

Nicole Owens had four points on the board for Dublin by the interval, as Goldrick added a point to her goal.

The floodgates opened in the second half, however, as Dublin stepped on the gas to outclass Westmeath.

Nicole Owens claimed the player-of-the-match award after finishing with six points but Davey was the leading scorer for Dublin as she registered 1-4.

Rowe and Aherne also netted second half goals for Dublin - who have now booked a safe passage to the All-Ireland quarter-finals.

Dublin, Monaghan and Mayo have now claimed three of the four provincial senior titles on offer – with the scene set for the Kerry-Cork Munster decider in Killarney this evening (7.0).

All-Ireland champions Cork regained the Munster crown on Sunday, seeing off last year’s winners Kerry by 2-8 to 0-7 in Killarney.

Cork lost to the Kingdom in the round-robin stages of the provincial competition but with player-of-the-match Orla Finn and evergreen defender Deirdre O’Reilly in excellent form, the Rebelettes avenged that loss to claim their 11th Munster crown since 2004.

The sides were level at 0-4 apiece in the first half before Cork gained a firm stranglehold on proceedings approaching the break.

The Leesiders added a point to kick-start the second half before Rena Buckley converted a penalty for Cork’s second goal.

Ephie Fitzgerald’s charges had little difficulty in closing the game out, holding Kerry to just three points in the second half to claim provincial honours again - another piece of silverware to add to their Lidl Division 1 League crown.

1 Nadia Power determined to push on to the next level
2 The Best Of Times: Harrington stares down Garcia in epic Claret Jug battle at Carnoustie
3 College football turns blind eye to Covid-19 by risking players' health
4 Rugby impasse continues as no deal reached in fourth round of IRFU salary talks
5 Coronavirus has turned Viktor Hovland into long drive champion
Real news has value SUBSCRIBE