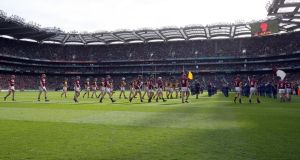 This provided one of the main talking points at the report launch in Croke Park, which also showed hurling championship gate receipts opening a gap on football for the first time in GAA history (even if factoring in the All-Ireland hurling final replay), helping contribute to a €1.6 million increase in overall income for 2014.

Central council’s total revenue for 2014 was €56.2 million, a growth of 3 per cent on the 2013 figure of €54.6 million. Gate receipts totalled €29.4 million (providing 52 per cent of revenue), marginally up on the previous year (although overall match attendances were slightly down), with the hurling championship bringing in €11.6 million, compared to €11.4 million for the football championship.

Many of the smaller counties (Leitrim, Longford, Monaghan, etc) received just €39,000, although GAA director general Páraic Duffy was quick to point out that this was not comparing like with like, highlighting the fact Dublin employs its own coaching and games administrators, while in all other counties they are employed by the province.

Other counties in Leinster, for example, would have their games development paid from the province allocation of €1.63 million; yet Duffy agreed there was still something of a discrepancy.

“We are trying to address that, but I would say the investment in Dublin has been very successful, in terms of participation, especially at club level.”

“I would certainly describe it as a stable, healthy year, on all fronts,” said Tom Ryan, GAA director of finance. “We’ve seen an increase in central council revenue, and stadium revenue, and as a result the overall investment back into the association has also grown. There is nothing spectacular here, and while it’s certainly sound and stable, there is no room for complacency.”

The increase in hurling gate receipts is certainly notable, not just at championship level, as hurling league receipts for 2014 of €1.6 million were up 76 per cent on 2013, although football was still ahead there (at €2.6 million).

The financial report also includes accounts for Croke Park Teoranta, which operates the stadium and other commercial events; turnover there was €38.2 million, up €9.5 million on the previous year, although 2013 only accounted for a 10-month period.

The 2014 accounts are for the 12-month period, bringing it in line with the other GAA accounts; still, that made for a Croke Park operating profit of €11.2 million, of which €7 million went to central council (up €3 million on last year).

“I would describe it as a very strong year, with some very positive results,” said Croke Park stadium director Peter McKenna, who also reported premium and suite revenues up by €2.4 million, with the premium level now completely sold out.

“It’s about establishing your foothold,” said McKenna. “The attendance at the last game, outside of GAA, was the biggest sporting event in Ireland, at 53,000. This is an investment. We did this without any Government support. Whether the Government support is forthcoming, you can see the advantage of taking 20,000 tourists into the country and the money that they spend, it’s a strong combination.”

For now, however, McKenna is not looking to bring in any NFL franchise, not yet anyway.

“Well, they’re two separate codes. They’re very, very different. The governing body at collegiate level has very little direct contact with the NFL. The NFL have established Wembley now as being their place. Collegiate football is also probably the one with the greatest support. It’s closer to ourselves as well, it’s an amateur sport. For now, the NFL have decided they’re going to spend their time in London. If they open a franchise there, then they won’t be able to play all their games in Wembley. So, others then, will start looking at alternatives. But that’s a fair bit off.”