‘This is actually the medicine that we all wanted. This is the vaccine we all needed’ 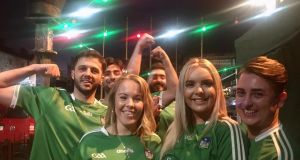 Supporters blew car horns as they travelled through the Treaty city on Sunday night as anthems like Limerick You’re A Lady and The Cranberries song Dreams bellowed out from apartment windows and pubs.

The county’s All-Ireland hurling victory was the perfect antidote to a catastrophic year.

“They say the happiest day of your life is when you get married and when you have your first child, but Limerick winning this All-Ireland has to be up there with all that,” said Limerick supporter John Costelloe, who watched the final from his home on Nicholas Street.

“I’m breathless after shouting and roaring for our boys in green. They’ve been so magnificent throughout the last 12 months in this very difficult period in terms of the pandemic, and what ambassadors they are for hurling and our beautiful city,” the Sinn Féin councillor said.

“It’s very difficult for supporters to celebrate safely, but people need to have a release, and this is actually the medicine that we all wanted. This is the vaccine we all needed, and if we could bottle this feeling and give it to every county, we certainly would.”

Noel Bowman (50) and his daughter Beverly Mullins (22), from Mungret, took in the atmosphere at Katie Daly’s tourist pub in the heart of King’s Island historical quarter, where they watched their team blitz Waterford.

“It was brilliant, incredible, and being the year that it was the GAA kept us going. They’ve been superb. I said it from the start, there was no one that could touch Limerick, and they hadn’t yet burst into their full stretch at all,” said Mr Bowman.

“Waterford had beaten a very bad Kilkenny team in the semi-final. Most of the teams in the country were second best to Kilkenny for years, but there’s a new era now – this is our time.”

Ms Mullins was also overjoyed at Limerick’s win. “It was a great match, great to win it again, just brilliant, and it was a different atmosphere. We’ll have to wait until next year to be in Croke Park again, we hope.”

Saoirse Cooney (23), from Childers Road, also watched from the pub. “I’m absolutely delighted. It’s been a terrible year, and do you know what, we’ve really brought it back now with this win. Thank god, we love our county – the best county in the world.

“It was fantastic stuff, really great. Sure, Jesus, we were up 11 points at the end, I’m not surprised ... I’m so proud to be from this city.”

Another pub-goer, Sean Nolan (27), from Claughaun, quipped: “We are absolutely spoilt to have a team like that. I’m all goosebumps. It’s unbelievable. This is the best day of the year. In the year that it has been – today is, hands down, the best day of 2020.

“I’m the proudest man in the world. It’s unbelievable. To celebrate this in a year that was as bleak is the most amazing thing.”

Dean Fanning (25), from Fedamore, was almost speechless as he savoured a pint to mark Limerick’s victory. “I can’t believe it, I’m delighted for the team, I didn’t think we’d do it again, so I’m absolutely thrilled.”

With players’ families and county officials not permitted in Ceoke Park due to the pandemic, he described the momentous Limerick win as “bittersweet”.

“It’s a magical time for Limerick hurling. The team have won every single competition this year, and we are firmly back in the great era of Mick Mackey in the 1930s, when Limerick performed with such consistency in every competition.”

Halal Hussain (27), was ecstatic as he joined his friends for celebrations. “It’s the best thing that could ever happen to the county. I have no words at all, I’m so happy.”

Unlike other years, however, there will be no official team homecoming and no Liam MacCarthy Cup doing the rounds. It is not being allowed out of Croke Park due to Covid-19 restrictions.